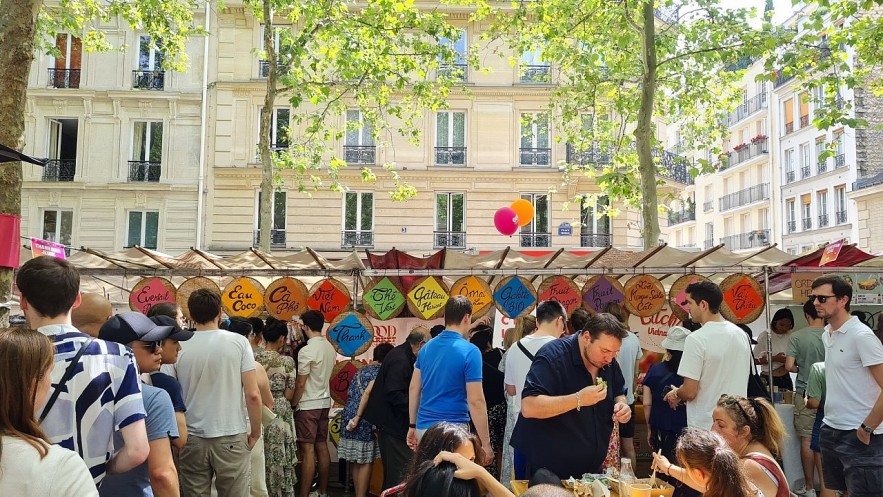 The festival attracts a large number of diners in France.

Ici Vietnam Food Festival was took place recently at Place Monge Square in the 5th Arrondissement of Paris, attracting a large number of diners in France.

With the aim of promoting the Vietnamese cuisine’s identities, from street food to the dishes served in restaurants, the festival saw the participation of 26 associations, businesses, and restaurants of Vietnamese people in France such as Foyer Vietnam, Ba Noi, Ngoc Xuyen, Thanh Binh Jeune, Tra Art, and France Plumfoot.

Local residents also enjoyed singing and dancing performances by Vietnamese-origin artists, along with folk games and the introduction of some French – Vietnamese books.

In his remarks, Vietnamese Ambassador to France Dinh Toan Thang highly valued the Ici Vietnam Festival, an event to introduce Vietnamese culture to French people, saying it showed the dynamism of the Vietnamese people in France and created momentum for more activities in 2023 – the year marking the 50th founding anniversary of the bilateral diplomatic ties and the 10th anniversary of the strategic partnership.

Florence Berthout, Mayor of the 5th Arrondissement, said the local administration and herself have always supported the cultural activities of the Vietnamese community.

Vietnam possesses many special cultural identities, including cuisine, which many French people want to learn about and explore, she stressed.

Vice Mayor Benjamin Isare expressed his delight at a large number of visitors to the event despite the hot weather, which proved the attractiveness of Vietnamese food.

The Ici Vietnam Festival was initiated by a group of young Vietnamese-French people who wished to organise festive events on different areas, from cinematography, arts to cuisine, to introduce Vietnamese culture to the French. This idea has been supported by the Vietnamese People Association in France and Foyer Vietnam and held annually since 2018./.