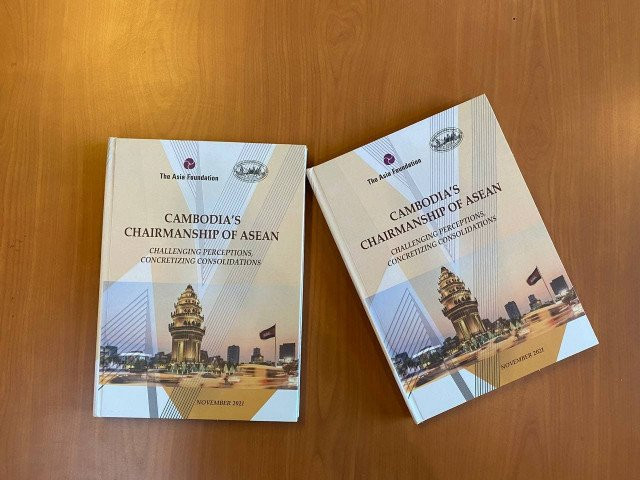 PHNOM PENH–The Cambodian Institute for Cooperation and Peace (CICP) and the Asia Foundation on Jan. 12 launched a book on Cambodia assuming the chair of the Association of Southeast Asian Nations (ASEAN) this year, providing an overview of the various issues the country will be dealing with.

The work entitled “Cambodia’s Chairmanship of ASEAN: Challenging Perceptions, Concretizing Consolidations” was launched in Phnom Penh during a conference attended by Kung Phoak, secretary of state at the Ministry of Foreign Affairs and International Cooperation, government officials, and members of the diplomatic corps and the country’s academia.

In his remarks, Pou Sothirak, executive director of CICP and former secretary of state at the Ministry of Foreign Affairs, explained that the book was meant to outline some of the challenges Cambodia will meet and opportunities this will present while also sharing thoughts on how to navigate partnerships within and without ASEAN.

“The book mainly demonstrates the essence of ASEAN centrality amidst geopolitical contestation, the significance of cooperation under the three pillars of ASEAN and, among others, the importance of public diplomacy in the wider ASEAN context,” he said.

Kung Phoak, who also served as ASEAN’s deputy secretary-general for the Socio-Cultural Community from 2018 through 2021, said that, with Cambodia chairing ASEAN for the third time—having also done so in 2002 and 2012—there is increasing international scrutiny on how ASEAN will navigate and manage some key regional issues, and especially the current situation in Myanmar where the armed forces seized power in February 2021 following the National League for Democracy winning the national elections in November 2020.

Pich Charadine, deputy director of CICP and the book editor, said that the book provides cross-cutting viewpoints on ASEAN affairs, ranging from major issues such as ASEAN centrality, its role and relevance for regional peace and security, to aspects of ASEAN regionalism, its external partners and how ASEAN might balance and navigate major powers’ rivalries all at the same time.

“I hope this book will be an added asset to the scholarly and diplomatic community alike, in light of [Cambodia’s] chairmanship this year and beyond,” Charadine said.

“Another angle that we wanted to bring forward is the role of Track II and public diplomacy alike, evidently the view from the Network of ASEAN-China Think Tank…and youth perspective,” she said.

Charadine authored the chapter entitled “Towards Cambodia’s Accession to ASEAN and 23 years on: Challenges, Prospects, and its Maneuverability” in which she also speaks of Cambodia’s membership having been delayed until 1999 following the armed clash between the Funcinpec political party and the Cambodian People’s Party in July 1997.