Laos and Russia Agree to Strengthen Ties and Expand Cooperation 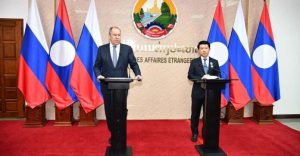 Foreign ministers from Laos and Russia have agreed that both countries must work together to strengthen ties and expand cooperation.

The Russian foreign minister was in Laos making an official visit from 6-7 July after first visiting Indonesia.

The two foreign ministers said they will increase bilateral cooperation in various fields including economics, trade, investment, energy, education, tourism, military affairs, and science and technology. Mr. Saleumxay expressed his profound gratitude on behalf of the Lao government for the immensely valuable assistance provided to Laos by the Russian government and people over the years, including in human resource development, military technology, humanitarian aid, and assistance with Russian-made Sputnik V Covid-19 vaccines.

The Russian Foreign Minister presented Minister Saleumxay with a Friendship Medal in appreciation of his active commitment in recent years to strengthening the longtime friendship and collaboration between Laos and Russia, as well as the Laos-Russia Strategic Partnership.