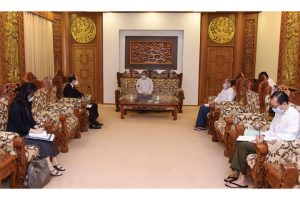 In response to claims by Myanmar’s regime of a meeting about boosting bilateral ties, Japan’s Embassy said talks with the junta’s appointed foreign minister were to call for an end in killings and the release of all detainees.

Ichiro Maruyama, the Japanese ambassador to Myanmar, met the regime’s foreign minister, U Wanna Maung Lwin, in Naypyitaw on Monday. Military-controlled MRTV announced that discussions related to the maintenance and enhancement of friendly bilateral relations.

The National League for Democracy (NLD) won by a landslide in the election but the military has claimed it staged the coup because of its electoral fraud claims and the civilian government’s failure to address them.

However, Japan’s Embassy in Yangon responded that Maruyama strongly urged the military regime “to stop resorting to violence against civilians by all means”.

Since the Feb.1 military takeover, at least 60 civilians have been killed by the police and military personnel.

The Japanese Embassy said Maruyama also pushed for the release of those being detained, including State Counselor Daw Aung San Suu Kyi, and to swiftly restore democracy.

The military has detained 1,857 people since the coup including politicians, activists and protesters, according to the Assistance Association for Political Prisoners.

The embassy said Japan will continue to strongly urge the military to stop violence against civilians, release those detained and restore democracy, the embassy said.

In late February Japan said it was considering halting development projects in Myanmar.

Right groups, including Human Rights Watch, have urged Japan to take joint action with other countries, including imposing targeted economic sanctions against the military and the companies it controls, supporting a global arms embargo and halting development projects.