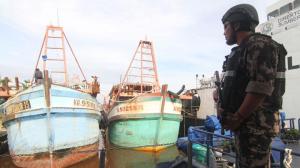 JAKARTA – The Maritime Affairs and Fisheries Ministry (KKP) and the Attorney General’s Office (AGO) will commence the sinking of 10 illegal fishing boats that were caught operating over Indonesian waters. The sinking is planned to be held at the Air Raja waters, Galang Batam.

“The sinking will be enacted by the Batam State district attorney as the executor against 10 illegal fishing boats,” said acting Director General of the monitoring of maritime resources and fisheries, Antam Novambar, in a press statement on March 4.

According to Antam, the ten boats consist of eight fishing boats flying the Vietnam flag and two vessels with Malaysian flags.

He also conveyed his appreciation for the work done by central and regional governments that enabled this execution to eventually take place as he believes the forceful sinking of foreign fishing vessels committing theft in Indonesian waters can be an effective deterrent effect for those committing illegal fishing.

The process will start by making a hole in the fishing vessel’s hull and fill the entire boat with water and other forms of ballasts to permanently sink the vessels to the bottom of the ocean.