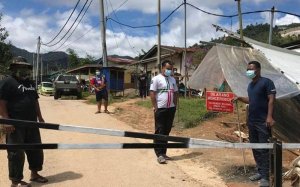 The Temiar tribe of Orang Asli in Kelantan are reported to have mounted a roadblock since December.

KOTA BHARU: Members of the Temiar community of Orang Asli were not wrong to mount a roadblock at their village, Pos Sendrop in Gua Musang, police said today.

Kelantan police chief Shafien Mamat said “their action is not actually wrong because the route is only for villagers, who number around 500. Perhaps their concern over Covid-19 has led to them taking such an action”, Bernama reported.

It is understood that residents of several Orang Asli villages including Pos Tuel in Gua Musang set up roadblocks to their villages since December last year because of fears that outsiders might bring in Covid-19 with them.

Shafien said he had instructed the Gua Musang district police chief to meet with the residents at the Temiar village. “There might be a new approach which could be improved over the issue and the personnel have been ordered to cooperate with the residents,” he said.

He advised the Orang Asli to register as a residents’ association so that they can conduct activities with ease. As a legal entity, they would be able to receive aid from the government whenever they wish to conduct any activities.

For example, he said, they could register with the National Security Council, which would allow aid to be easily channelled to the residents there.

He added that it would be best if the residents, especially the Tok Batin, reported to police the reasons for setting up the roadblock, in order to avoid any misunderstanding.