After Coup, Myanmar Military Says It Will Hold New Election 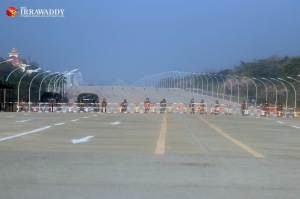 Myanmar soldiers block the road to the Parliament and President’s Office in Naypyitaw, the capital of Myanmar, on Feb. 1, 2021. / The Irrawaddy

After the Myanmar military (or Tatmadaw) issued a statement in the morning announcing that it had taken control of the country and declaring a one-year state of emergency, the commander-in-chief said the military would hand power to the winner of the election.

During a meeting of the new National Defense and Security Council (NDSC) attended by acting President U Myint Swe, Snt-Gen Min Aung Hlaing said that while taking over the country, the military would follow the provisions of the military-drafted 2008 Constitution and existing laws that do not violate it. Acting President U Myint Swe served as vice president in the National League for Democracy (NLD)-led government.

Two quasi-civilian governments served one term each over the past 10 years following the introduction of military-led reforms. The new Parliament (which has now been dissolved) was slated to begin its first session on Monday.

Myanmar State Counselor Daw Aung San Suu Kyi, President U Win Myint, the NLD’s chief ministers and ministers of the states and regions, and some of the NLD’s Central Executive Committee (CEC) members were detained a few hours before the takeover was announced.

The government guesthouse housing lawmakers in Naypyitaw was closed by soldiers who arrived in trucks. Internet access was cut off in the early morning and then restored in some places just before noon, but mobile phone services have been cut off across the country since early in the morning.

Just a few hours before the new Parliament was set to convene, acting President U Myint Swe declared the country to be under a nationwide state of emergency for one year under Article 417 of the 2008 Constitution. He said the country’s legislative, administrative and judicial powers had been transferred to the military’s commander-in-chief, in accordance with Article 418 of the charter.

Defending its action, the military claimed it had found more than 10 million irregularities in connection with voting in the Nov. 8 general election that served as indicators of potential voter fraud in all states and regions. It said the number was equivalent to more than 25 percent of the eligible voters in the election.

The military said that due to the government’s failure to take steps to resolve the military’s claims of electoral fraud, the NLD’s move to form a new government and convene a new Parliament amounted to an attempt to forcibly seize state power as defined under Section 40(c) and Section 417 of the Constitution.

It said the Union Election Commission (UEC) failed to address the voter list irregularities, and added that it was forced to act because the Parliament and government had rejected the military’s demands, including that an emergency session of Parliament be called and that the government convene the NDSC.

Last week, the UEC rejected all of the military’s claims of electoral fraud in the November general election, including its allegations of voting malpractice and that people had voted more than once in some cases.

The NLD won Myanmar’s Nov. 8 general election in a landslide. NLD candidates won 920 of the 1,117 elected seats nationwide, including seats in both houses of the bicameral Union Parliament and the state/regional parliaments, as well as ethnic affairs minister posts.