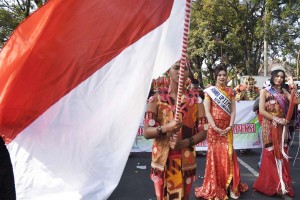 JAKARTA Civil rights groups and indigenous communities are calling on the House of Representatives to pass the indigenous peoples bill that will provide recognition of their rights and customary law in certain matters, such as the management of natural resources and the distribution of inherited land.

They also slammed the legislative body for passing the Job Creation Law and revising the Mining Law, both of which they deem detrimental to indigenous communities across the country.

Passing the indigenous peoples bill is important for the country amid a lack of regulations that define and protect indigenous rights, according to the Association for Community-Based and Ecological Legal Reform (HuMa).

“There are some [bylaws on indigenous rights], but they still cover only a limited number of issues about natural resources,” HuMa executive coordinator Agung Wibowo said.