MALAYSIA When Maradona brought Brickfields, Kuala Lumpur to a standstill 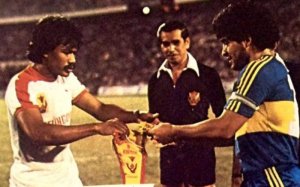 One of the most popular pictures over social media today is that of Maradona and Mokhtar Dahari exchanging team emblems before the match at Merdeka Stadium in 1982. (Twitter pic)

There was wild excitement over the visit of the Argentine superstar who was coming to the city as a businessman, 23 years after he had led Boca Juniors to a 2-1 win over Selangor in a friendly match at the Merdeka Stadium.

The occasion on May 20, 2015, was the opening of Boby & Maradona Gold Diamond jewellers of which he was a partner with Indian jewellery tycoon Boby Chemmanur.

Maradona did not wear a veshti as he entered the outlet at NU Sentral Mall, but no one was disappointed. Rather, there was thunderous cheer from scores of fans.

Maradona and his business partner Boby Chemmanur wearing veshti in a promotional poster.

Wearing a T-shirt in the blue of the Argentinian national team, he danced to the music and showered flying kisses to his fans from the stage.

The power of Maradona overwhelmed the presence of Bollywood star Karisma Kapoor, who was also there.

He wowed the crowd by keeping the ball airborne for minutes with his feet, chest and head before heading the balls into the crowd.

His presence that day motivated hordes of young boys in Brickfields to play football.

Among the crowd, some wearing the blue-and-white striped jersey of the Argentinian football team, was a 15-year-old secondary school student and Brickfields resident S Ganeshram.

Ganeshram recalled: “Seeing the person behind the ‘Hand of God’ in my neighbourhood was a surreal experience and a dream come true.”

For university student S Ganeshram, seeing Maradona at an event in Brickfields in 2015 was a dream come true.

Now a second year biotechnology student at International University of Malaya-Wales here, Ganeshram, said it was a magical moment that left an indelible mark in his life.

“The mall was packed with fans and we had to run to every single floor to get a glimpse of him.

“One of my friends cried as Maradona waved his hands in every direction. That was the power that man had on his fans,” said the Argentina fan.

As a golden kid in 1982, Maradona cast his spell on 25,000 football fans when he lit Merdeka Stadium with his silky skills in the match against Selangor Invitation, led by Malaysian legend Mokhtar Dahari.

The photo of Maradona and Mokhtar exchanging pennants before the kickoff was today widely shared over social media after news of the Argentine’s passing broke.