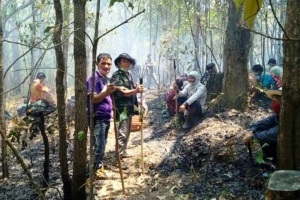 Thailand has come up with an innovative project to transform natural waste, such as dried leaves in forests, into a renewable energy source. They have set a target, for 17 northern provinces, to convert 100 tonnes of dried leaves per day into solid fuel.

Natural Resources and Environment Minister Varawut Silpa-archa says that project could help reduce hotspots during the dry season by as much as 20%. Furthermore it ease the problem of dust particles, especially PM2.5, in the atmosphere.

Instead of burning dried leaves in the forests, he said that utilizing the waste would be more sensible. The natural waste could provide a new source of income for rural people.

The minister said that the nine northern provinces of Chiang Rai; Chiang Mai; Lamphun; Lampang; Phrae; Nan; Mae Hong Son; Phayao and Phitsanuloke, where most hotspots are recorded each year, have been chosen to trial the project, with the participation of rural residents.

He also said that the ministry has approached companies,involved in the conversion of natural waste into fuel, to purchase at least 100 tonnes of dried leaves from each of the nine provinces on a daily basis.

He said the ministry is in the process of expanding a people’s network to fight forest fires and protect the forests in their respective areas, after the ministry transferred the responsibility for forest fire management to local administrations.

Meanwhile, state and private sectors are stepping up efforts to give Thailand a new clean look, with economic activities fuelled by clean energy. New power plants and cars will be powered by energy that is more friendly to the environment.

The move is not only because oil and gas reserves are shrinking, but the government also wants its investments in renewable energy projects to drive the economy during the recovery, lasting well into next year.

Authorities set a target to have 30% of total energy consumption in 2036 derived from renewable resources, almost double its current share.

According to the National Alternative Energy Development Plan, renewable power generation capacity in the country must reach 16,788 megawatts by 2036. Thailand can generate 53% of this target at present.

Renewable resources range from biomass and biogas to sun, wind and water.

Biomass comes from plants and agricultural refuse, while biogas is produced by manure and wastewater from agro-processing industries and solid waste.

Electricity generated from these sources contributed 10.1% of national electricity consumption in September, compared with only 2.1% in 2010, according to the Alternative Energy Development and Efficiency Department.

The increase is satisfactory, but still insufficient if Thailand is to attain its goal in the strategic plan, said the department.