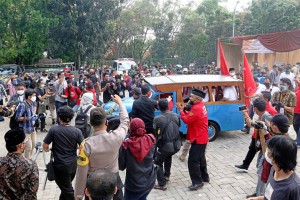 Mayoral candidate Muhamad and his running mate Rahayu Saraswati Djojohadikusumo arrive at the South Tangerang General Elections office on Sept. 4 in an old-fashioned public transportation vehicle known as an “oplet” to register for the December regional election. .(JP/Dhoni Setiawan)

South Tangerang must prepare for a competitive mayoral race next month, results from the latest pollster survey have shown, as election candidates with a distinguished track record of serving the public compete in a three-horse-race that looks likely to be decided by a large number of swing voters.

The race to the top seat in one of Jakarta’s fastest developing satellite cities looks tight and is likely to be decided by the swing vote, according to a survey by Indikator Politik Indonesia.

Muhamad and Rahayu Saraswati Djojohadikusumo topped the electability ratings with 38.6 percent in early November, while the Benyamin Davnie-Pilar Saga Ihsan pairing followed closely with 33.2 percent of respondents’ votes going in their favor.

The Siti Nurazizah-Ruhamaben ticket trailed with 16.4 percent of respondents saying they would vote for the pair.