Without shoes or a helmet, a young Cambodian cyclist steals the show

This picture of Theara bearing down on the racetrack won him countless fans as it was circulated on social media. Photo supplied

Pech Theara gripped the curved handlebars of his rusty old bike, planted his bare feet on its pedals and stormed as fast as he could towards the finish line.

The odds were against him as the 13-year-old faced off against kids with nicer bikes at the Flying Bikes MX Bike Park in Phnom Penh’s Prek Leap commune on November 8.

But spectators couldn’t take their eyes off the kid on a crickety old bike bought from a trash picker for $5.

Theara tells The Post: “I found there was a bike race and my friend and I asked the organisers to register. They did not mind that we didn’t have any of the standard equipment.”

He had flip-flops with him, but says he has better control riding barefoot.

“I normally wear shoes but when I was on the racecourse, I took them off since it was easier to move my feet,” he says.

His father, 53-year-old Pech Tha, had no idea his son had even entered the race. He found out when Theara returned home with several gifts and a local oknha called wishing to donate a new bicycle to the brave youngster.

“He and his friends joined the competition on their own accord. I did not know,” says Tha. “I did not expect that they’d be allowed to enter the race.”

Theara held his own in the race, despite competing against better-equipped youths. Photo supplied

Catry says the kid’s races were held on a shorter, easier and safer course. Kids who live nearby were allowed to join the race and didn’t have to pay a registration fee.

“We just want to give them the chance to race, as this is a unique opportunity for them to enter a bicycle race,” Catry, also the deputy secretary-general of the Cambodian Cycling Federation (CCF), tells The Post.

“Whenever possible, we provide them with helmets, but in this particular case, we didn’t have any spares available. So we had to decide whether to let them race or not.”

After consideration, organisers felt the risks were low because the racers would be riding at only a moderate speed. Furthermore, there were no hard obstacles on the course and it was made entirely of dirt.

A veteran cyclist, Catry says local boys ride their bikes every day without protection, and sometimes even play in high-traffic areas which present more dangers than can be found on a racetrack.

But Catry says he will improve the safety of the races and make sure to provide helmets in the future.

“As you can see in the photos, the kids were very excited and we were glad we allowed them to take part in the race. Those who criticise us are usually those who do nothing [to help the kids],” he says, adding that four or five locals entered the race.

Without letting the other kids’ shiny bikes dull his resolve, Theara used all his might to speed towards the finish.

“I knew they had beautiful bikes and sport suits. I did not feel frustrated or ashamed because I wanted to race and tried hard to win,” says Theara, the youngest of five children.

Theara, who’s currently studying in the fourth grade, lives in Prek Ta Sek commune’s Prek Takong village in Chroy Changvar district with his father, a construction worker, and his mother, who stays at home and cares for the children.

He says he got off to a good start to the race but suffered setbacks after crashing in the dirt twice.

“I was in second place when the whistle blew. I tried very hard to get my bike to reach full speed but the chain broke from the chain wheel and fell, causing me to fall as well. I finished in sixth place but did not win any prize because the winners ranged from first to fifth,” he recalls.

Theara’s race was one of several featured at the second round of the Cambodia Mountain Bike Series 2020. 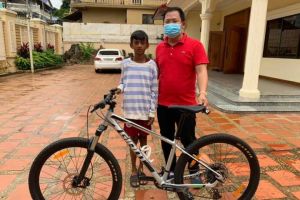 Photos of Theara circulated on Facebook and caught the attention of Lang Tyleang, a local oknha who tracked down the young cyclist to present him with a gift.

Tyleang tells The Post: “I liked his determination despite the fact that he could not afford to buy a standard bicycle or equipment. I used to live in his situation so I wanted to share something with him.”

The gift was a brand new Giant mountain bike.

Before hopping on his new bike, Theara says: “When I received this bike I was happy. I plan to enrol for races in the future.”

“Firstly, I want to have my family get help and if possible, I also want to have new clothes and some study materials,” he says.

Kind donors listened to his wishes and donated food and money to his family. A Facebook-famous female tycoon reached out to him and promised to build a new home for his family to replace their old dilapidated tin-walled house.

The Cambodian Red Cross stepped up as well, as officials donated food supplies and study materials to impoverished kids who participated in the race.

The greatest gift was offered by Beltei International School, which presented Theara and his two friends with scholarships.

“I was very excited when I got a call from Beltei school. They gave a full scholarship to study general education from Grade 4 to Grade 12,” Tha says.

Another tycoon offered to build a new home to replace Theara’s family’s old one. Photo supplied

Theara, no stranger to a challenge, says he’ll do his best to excel.

“I am very happy. I will try my best to finish high school from here,” the teenager says.

As for the wider cycling scene in the Kingdom, Catry says the most important thing is increasing the number of races in the country.

“I strongly encourage clubs and teams from all provinces to organise their own racing events, and we are prepared, together with the Cambodian Cycling Federation, to support them with technical expertise,” he says.

“Racing is what motivates cyclists to train and improve. There cannot be improvement without racing.”

Catry says his wish is that Cambodia’s finest are able to compete in international races next year.

“If we want to win medals at the 2023 Southeast Asian Games, sport federations must be provided sufficient funds to send their best athletes to compete,” he says.

Theara may or may not represent his country as a professional cyclist in the future but he has plenty of time to decide.

For now, his dream is to serve his nation in a more militant sense.

“I want to be a soldier to help protect the country,” he says.