Pulling from her past, British author spins a tale of discovery set in Cambodia

Yetter reads a passage from her new book with her mother. Photo supplied

PHNOM PENH – Gabrielle Yetter, a British author who spent several years living in Cambodia as a writer and NGO employee, released her first fictional work set in the Kingdom, a coming-of-age story called Whisper of the Lotus, on November 9.

Yetter says she wanted to give readers a glimpse of Cambodia’s beautiful sights through the eyes of Charlotte Fontaine, a fictional young woman who travels to the Kingdom to visit her friend.

When Charlotte arrives in Cambodia, she discovers a land of golden temples, orange-clad monks and kind-hearted people. But she soon realises things are not what they seem, including her own family relationships, which bubble to the surface through a series of revelations.

Yetter says: “Throughout the book, Charlotte is on a quest that takes her through dusty back alleys and shimmering pagodas where she meets people who provide insights into her own strengths and imperfections.

“I wanted to share some of the exotic charm of the country in my book,” adds Yetter.

In 2010, Yetter and her husband Skip moved to Phnom Penh, where she worked as an English resource advisor at an NGO and wrote for local publications and websites.

The couple co-wrote Just Go! Leave the Treadmill for a World of Adventure, a book based on their experience moving across the world which was published in 2012.

In 2013, Yetter published The Definitive Guide to Moving to Southeast Asia: Cambodia, The Sweet Tastes of Cambodia and two children’s’ books – Ogden The Fish Who Couldn’t Swim Straight, and Martha the Blue Sheep.

Yetter says: “The book about Cambodian desserts [The Sweet Tastes of Cambodia] was the most fun as I spent two weeks travelling around the country in a mini-bus, visiting people in their villages, learning about the way they made desserts, and tasting every one of them.”

While writing the 366-page Whisper of the Lotus, she had plenty of firsthand knowledge to draw on.

“After experiencing what it felt like to live there, it quickly became my soul home and I wanted to take readers into my Cambodia,” she says.

She included several real-life characters in the book, such as Som On, a tuk-tuk driver who became a good friend, and wove in her own personal experiences.

“A sleazy cafe owner, a compassionate Buddhist monk, an elderly Cambodian who survived the Khmer Rouge and a woman who reminds her [Charlotte] of her mother. All of them play a role in teaching her different things about herself,” Yetter says.

“It is a story about friendship and family, love and identity, a tale about no matter how far you travel, the path will always lead you back to yourself.”

She says she wanted to do more than record the sights, sounds and smells of Cambodia, and in the book, she transports readers to the rice fields of the Kampot countryside, the sizzling noodle bars in Russian Market and the chaotic roads of Phnom Penh.

“I wanted people to read about the kindness of the people and get a taste for the Cambodia I experienced so they may be able to visit it through my words,” says Yetter.

A former journalist for The Star, a daily newspaper in South Africa, Yetter says she used ‘lotus’ in the novel’s title as a metaphor for Charlotte’s life.

A lotus begins life underwater buried in mud, but as it grows, it gradually pushes the mud aside until its petals open one-by-one and it finally emerges on the surface as a beautiful flower.

“In Buddhism, the lotus symbolises potential and I chose this title because Charlotte, like the lotus, discovers how to survive and thrive in situations that challenge her and make her question everything about her life,” Yetter says.

Writing the book brought back fond memories of Silk Island, lush rice fields and the small villages she visited while living in the Kingdom.

Yetter will donate proceeds from the first 57 days of book sales to the NGO Justice and Soul, which provides job training to at-risk youths and victims of human trafficking. Photo supplied

“I also love telling stories about some of the Cambodian characters in my book as they remind me of the gentle kindness of so many of the wonderful people we met there,” she says.

The author chose to donate proceeds from the first 57 days of book sales to Justice and Soul, an NGO which provides cosmetology training for at-risk youth and victims of human trafficking in Cambodia.

“The reasons are twofold. One, because Justice and Soul was founded by my dear friend, Matthew Fairfax, and I admire the enormous amount of work and passion he put into creating it and, two, because I have seen for myself the difference this work has made in the lives of young people.” 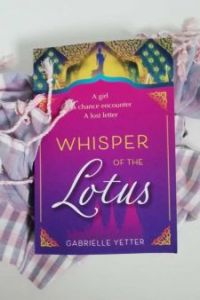 Yetter will donate proceeds from the first 57 days of book sales to the NGO Justice and Soul, which provides job training to at-risk youths and victims of human trafficking. Photo supplied

With Covid-19 constraining worldwide travel, Gabrielle Yetter now lives in England but wishes to return to the Kingdom soon.

“Cambodia is my soul home and I miss the country and our Cambodian friends so I know we will be back one day in the near future,” says Yetter.

“I realise many things may have changed when we are able to return but I know the people will always remain the same.”

Whisper of the Lotus is available on Amazon as an e-book or paperback.