“Thai people put gold leaf on things we respect. So I’m doing it, but in a sardonic way. These politicians, soldiers, and media all think that they’re correct and righteous,” Kritsana said. “Since they think they’re always right, instead of showing disagreement with them, I’m complimenting them.” 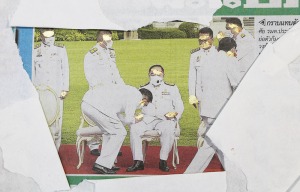 Images of Gen. Prayut Chan-o-cha or army chief-turned-palace official Apirat Kongsompong covered in gold leaf are to be expected –  but Kritsana’s work will push the envelope and even touch on the monarchy.

“It’s all related. If I didn’t include it at all, it wouldn’t be complete.” 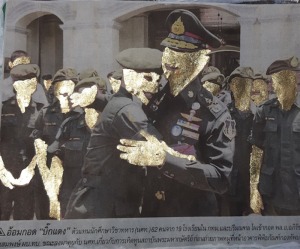 Kritsana says the media of Thailand are also part of the “political game” and will also feature in his work.

“Every news agency has their own hidden agenda. Many publications clearly pick sides. Just look at the owner or the editor. Look what they choose to be on the front page,” Kritsana said.

Kritsana said he is continually making new pieces of art for the exhibition, and plans to add more images to the collection after the large pro-democracy rally planned for Saturday.

“Siamese Talk” will be on display from Sept. 25 to Oct. 24 at Jam. The opening event is from 7pm onwards on Sept. 25, and Kritsana will be there to present his work. Jam BKK is a walkable distance from BTS Surasak.