Thai Beauty, ‘Samina’ Was Bullied for Her Skin, So She Embraces It and Runs for A Beauty Pageant 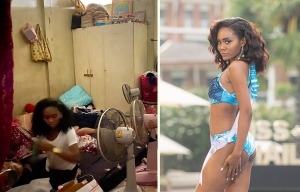 Sirilux “Samina” Somsri in her dorm. Samina, right, at a swimsuit photoshoot for Miss Universe Thailand 2020 on Sept. 23, 2020.

BANGKOK — Samina had a dream.

As a schoolgirl, the half-Thai, half-American had a dream that she woke up and had white skin.

“Everyone was surrounding me because they loved me so much. Samina! They called out,” Samina said. “When I woke up, I scrubbed my skin with Scotch Brite.”

Today, Sirilux “Samina” Somsri, 26,  is much more confident in her identity – the Thai-black beauty raised in Saraburi is one of the 30 finalists vying for the Miss Universe Thailand 2020 crown.

Her training and travel fees for the competition are sponsored through donations.

“I asked if I could have my training during hours when there is still public transportation. They said it’s okay, because they will pay for my taxi fees,” Samina said.

She recently went viral on the internet after photos of her humble dorm were posted online. In an interview with Khaosod, Samina said her dorm only costs 1,500 baht a month and that she had been staying here back when she studied at Ramkhamhaeng University.

Samina had a first brush with fame when she was on one episode of The Face Thailand Season 5. Although she was not picked as a contestant on the reality show, Samina got to tell the world a bit about how she had been bullied.

“On the first day of kindergarten, the kids stuffed gum into my hair. It couldn’t be taken out so my hair had to be cut off,” she said, voice shaking. “In grade 5, my classmates took turns spitting on a chicken, and everyone forced it into my mouth. …I didn’t want to go to school, but I knew I had to get an education or else my life would be full of suffering.”

Samina grew up in rural central province Saraburi. Even before she understood about race and ethnicity, Samina said people with skin “as dark as hers” would tease her for the color of her skin.

“I didn’t understand why I was being bullied. The people bullying me had skin that was as dark as mine, but they called me ‘blackie.’ Or, someone with hair as curly as mine would call me “squiggly head.” I was confused about the difference between us,” she said.

Her mother decided to use the tough love route to strengthen her daughter, after she came home one day and said she didn’t want to go to school anymore.

“‘If you don’t fight for yourself, what can I do for you? I can’t be with you 24 hours,’ my mom told me,” Samina said. “My mom said if I didn’t fight for myself when I was bullied, she would spank me as much as I had been bullied when I came home. I knew I had to fight since my mom’s beatings really hurt.”

Without any peers to support her, much less her teachers, Samina started to deal with bullies who just came up and insulted her to her face.

“I’ve dealt with all kinds of bullies. Some people are lacking confidence in themselves so they came to decrease my confidence,” she said. “Others just want to bully me.”

However, one insult – and her response to it – was so common that it made her decide to rethink her relationship with her biraciality.

“When someone called me ‘blackie,’ I would ask why they had to call me that. Then they always replied, ‘well, are you black or not?’” Samina said. “I realized that I didn’t accept myself for who I was yet. I didn’t respect myself yet.”

After scrubbing her skin with Scotch Brite – and getting searing pain in return – Samina told her mom she didn’t want to be white anymore.

“She told me, let’s change from scrubbing with Scotch Brite to tamarind. It will make your skin smooth. And you will be beautiful in your own way.”

The preliminary and final rounds of Miss Universe Thailand 2020 are on Oct. 7 and Oct. 10, respectively. Today, Samina’s dreams are of winning the crown with exactly who she is.

“I do not need any pity or mercy. I’m not begging or points. All my hardships and obstacles have made me who I am today,” Samina said. “If you look at me and feel any kind of power, I want you to overcome your obstacles too.”

Samina may soon earn a new kind of fame, however. On Friday, a video of Samina insulting Gen. Prayut Chan-o-cha was posted.

“For Samina, Uncle Tuu is a living thing on this Earth that should not be living,” Samina says in the video.

The video, posted by user Chanokporn Yomsung, said that she “has nothing to her but a bad attitude.”

Thailand’s beauty queens of 2020 seem to not shy away from criticizing the government – Miss Grand Thailand 2020 said on the stage for the government to “get out.”