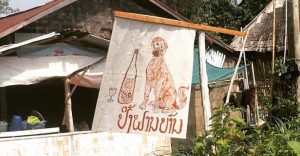 The dog meat trade remains steady in Laos, with the illegal capture of domestic dogs becoming a serious issue amid the economic downturn.

In the video, posted by Tholakhong, the owner of the dog caught the man in the act of feeding the dog a mixture of acid and rice. The man claimed he captured the dogs and sold them in order to meet the rising costs of his children’s schooling.

He was caught by the dog’s owner as he attempted to flee the scene with the dog on a motorbike.

Villagers regularly exchange dogs for blankets or other items with dog meat traders.

Article 353 of the updated penal code states that individuals who abuse or mistreat animals, including acts such as ​incarceration without food or water, use of animals for labor without adequate rest, severe beatings, transportation in substandard conditions, cruel slaughter of animals, or the use of poison against animals, will face imprisonment or fines of between LAK 500,000 kip to 3,000,000.

Despite the new law, the trade in dog meat remains a profitable one, netting those who capture a dog up to LAK 200,000 per animal.

Restaurants serving dog meat, known as farn barn, or “village venison,” in Lao language, do not appear to have been criminalized, as the law applies only to the capture or storage of animals, and not the sale of their meat.