The exhibition is open to visitors from August 18 to September 30. 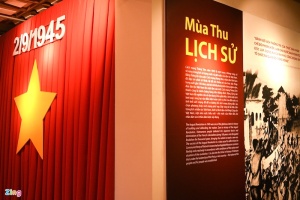 An exhibition is held to mark 75th anniversary of August Revolution. Photo: Zing

Divided in three thematic areas, the exhibition showcases more than 300 typical documents, pictures and artifacts of the historical revolution in 1945.

Visitors are required to strictly comply with regulations on prevention and fighting against Covid-19 to minimize the risk of Covid-19 spread in the community.

The exhibition, revolving around three main themes: “Historical Autumn”, “The Strength of Belief” and “Following the Victory”, is jointly held by the Vietnam Military History Museum, the State Records and Archives Department of Vietnam, and the National Museum of Vietnamese History at 28A Dien Bien Phu, Hanoi.

The exhibition displays valuable documents such as the Declaration of Independence, pictures at Ba Dinh square on September 2, 1945, political thesis and leaflets distributed in the advent of the August General Uprising.

An artifact related to such transcendental moment of the Vietnamese history. Photo: Zing

Visitors can read many testimonies of witnesses of Vietnam’s historical moments. One of them was Lieutenant Colonel Mai Kha Do who flew an AN26 aircraft carrying goods and medicine to aid people in Hue and Danang.

A photo under the theme “Historic autumn” captures the moment in which President Ho Chi Minh read the Declaration of Independence at the historic Ba Dinh square. Photo: Zing

Some newspapers such as the Vietnamese army, Rescue the Nation and Truth published from 1941 to 1945, are carefully preserved and displayed at the exhibition. Photo: Zing