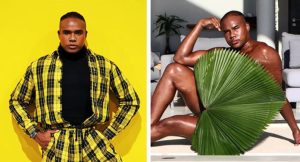 BANGKOK — “I’ve never seen a negro toot!” a market stall lady shouted loudly, at Rusameekae while he was strolling at the market, using slang for effeminate gay man. He was 15.

Now at 33, people who see Rusameekae Fagerlund in public will often mob around him for selfies with the celebrity. The entertainer spoke about his experiences of growing up both black and gay in an interview with a Thai black empowerment group.

“We live life with this annoyance with something we’re not responsible for. People in Thailand see black skin and go, “ew, don’t be black, don’t be black,” he said. “I always say it’s not wrong if you want to be white, but you have no right to view black people as bad.”

Rusameekae, who has Senegalese, Thai, and American ancestry, is a TV talk show host and actor who was born in Chiang Rai and grew up in both Thailand and Sweden. In June 2019, he married his longtime boyfriend in Sweden.

Rusameekae recalls that most of the people who bullied him growing up were older Thais. Relatives on his Thai side would purposely compare and favor his white Swedish sister over him, while teachers would make up nicknames for him that the entire class would use.

One memorable insult he’s been called is “cottonseed” (สำลีเม็ดใน), a Thai saying refers to having black skin, especially among lighter skinned people – just like a cottonseed in a ball of cotton.

“These words all come from adults. There’s no way children know them on their own. Children play with each other and love each other,”  Rusameekae said. “It’s the adults that teach them these words.”

Once on set, he said one a five-year-old child accidentally bumped into his leg and said, “Ew, you’re black.”

Thai soap operas and advertisements are long known for their constant use of black face. Rusameekae said it’s a symptom of the kind of society he is in – that it’s so wrong to be black that blackface has to be used.

Like most LGBT entertainers, Rusameekae’s main trade is in comedic or slapstick roles or as the TV show host for variety shows. When asked if he feels like he’s been typecast, he says the opposite.

“Being comedic is difficult, and is a skill in itself,” Rusameekae said. “Imagine holding a power bank or just having a single hat and you need to make it funny somehow. Being funny needs talent. When you see LGBT in entertainment know that there’s so much talent needed in talking and acting to be entertaining.”

Rusameekae said he embraced the term toot that was thrown at him as an insult when he was a kid. He also refers to himself as the “Thai King Kong” – while Westerners may find that comparing black people to monkeys is offensive, Rusameekae says he’s reclaimed the meaning to be empowering. It’s even on his IG bio.

“Some people asked me if I was bullying myself by calling myself that,” Rusameekae said. “Actually, I feel like it fits me because I’m big and strong, and King Kongs are cute in their own way.”

“I experienced the soft version, unlike Morris,” Rusameekae said. “I grew up with Beyonce, Rihanna. I can survive now.”

Today Rusameekae is the host of the “Dress My Love” show on Channel 3 and YouTube and owns the “Buay Rusameekae” brand of pickled plum, tamarind, banana, pineapple, and mango snacks.