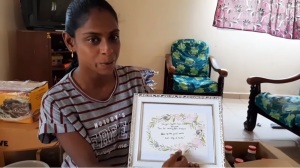 IPOH, May 16 –  “We are just ordinary people, we never thought we’d receive presents from the Prime Minister. Thank you.”

Pavithra, 28, said she and her husband, M. Sugu, 29, also received a greeting card with a note saying: “With compliments from Tan Sri Muhyiddin Yassin. Keep up the good work. Just stay at home.”

In a telephone interview with Bernama today, Pavithra said: “When the gifts were delivered to my house, I could not believe it because I felt like who am I to receive them (until) you called to ask whether I had received the presents or not.”

Pavithra, who hails from Buntong here, said she and her husband have used the tripod for video interviews, especially during live telecasts, but not for filming their cooking activities yet.

“I’m still comfortable using the mugs (to place her handphone on to record her cooking activities). Besides, the kitchen is quite small. But we definitely used the tripod for other purposes and it was really helpful. Thank you, Mr Prime Minister,” she said.

The housewife added that the gifts, as well as the rising number of their YouTube subscribers, have motivated her to continue with her cooking videos.

She said that after the video clip of their interview with Bernama was uploaded during Wesak Day (May 7), the number of ‘Sugu Pavithra’ subscribers has risen from 160,000 to 441,000 as at 10.30am today.

The mother of two also admitted that she had been ‘quite busy’ entertaining at least 20 calls daily, either for interviews or from those who wanted to deliver products to her home.

The ‘Sugu Pavithra’ YouTube channel is now the talk of the town for its cooking videos, which are recorded in fluent Malay and feature a variety of recipes, especially from the Indian community. — Bernama