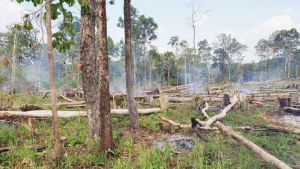 Mondulkiri province has been host to a litany of land disputes, the most recent involving 13 suspects detained in April. Environment Ministry

MONDULKIRI PROVINCE – In April, 13 suspects were charged in the Mondulkiri Provincial Court for encroaching on forest land in wildlife sanctuaries at Phnom Prich, Srepok, Nam Lear, and Keo Seima, said Ministry of Environment secretary of state and spokesperson Neth Pheaktra.

The sanctuaries are protected under the Law on Natural Protected Areas. He said the 13 perpetrators violated articles 56, 60, and 62, which all concern destroying natural resources.

Pheaktra said the perpetrators used a variety of tricks to illegally occupy state forest land in the protected areas by claiming their group had lived on and reaped benefits from it for many years.

“No one has the right to occupy, buy or sell land in protected areas. The ministry requests that all citizens who are not well-versed in the law to stop being cheated by fraudsters.

“They should immediately stop illegal activities such as clearing, logging, burning, encroaching on forest land, building huts or factories, planting crops and relying on state land in the protected areas.

“Immediately stop all state land trading. Deconstruct all types of constructions which were built on your own and hand the land back with no conditions to the ministry, otherwise, you will face legal action,” he warned.

Kreung Tola, a forestry activist in Mondulkiri, said he supported the detention of the 13 perpetrators.

However, he said he has no faith in the authorities to protect the forests in the four sanctuaries because perpetrators and powerful people put up fences every day to steal land.

“So far, they have been facilitators of forest crimes. Those who have money give it to the officials, and the officials turn a blind eye to the crime. When citizens ask, they act like they don’t know anything.

“If it involves the poor, they crack down on them immediately and send the case to court. But when it comes to the rich, the authorities do not send their cases to court. Instead, they just have them sign a contract.

“On top of that, if a citizen reports a crime, the officials will sue the citizen, claiming that it is false or misleading information,” he said.

Bunnar wants powerful land grabbers to be prosecuted as well and advocated for an equal application of the law.

“Forest crime is an actual offence. Even after 15 years, we can still dig up cases and prosecute.

“In Mondulkiri province, many powerful and rich people are involved in forest land encroachment. Therefore authorities should examine these cases and take legal action, as they do with poorer people,” he said.