The Baduys Of  Indonesia Shut Themselves Off From Outside World 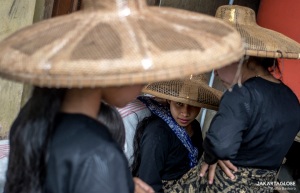 BANTEN PROVINCE – The Baduy, a Sundanese ethnic group whose traditional home is located near Rangkasbitung in the province of Banten, performed the rare Kawalu ritual on Tuesday to shut themselves off from tourists and outsiders until at least the end of next month.

Jaro Sahijah, the leader of the Outer Baduy community, said the ritual was the Baduy equivalent of the large-scale social restriction already in place in some parts of Banten.

After the Kawalu, the Baduy people will cease interacting with anyone from outside their village. Some exceptions will be made, for example doctors or midwives will be allowed to come into the village when their services are needed.

In the Baduy village, daily activities went on as normal, no one was observing physical distancing and there was not a facemask to be seen.

The Baduys have been storing more rice in their traditional wooden barns in anticipation of a prolonged pandemic.

The Kawalu ritual will end with the Seba Baduy, a traditional march by thousands of Baduys from the inner and outer villages to the Lebak District Head’s residence in Rangkasbitung, around 40 kilometers away. 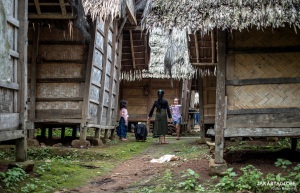 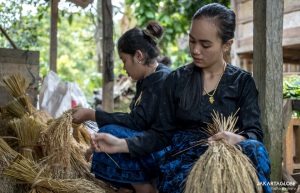 Baduy women sort the rice plants before storing them in the barn. (JG Photo/Yudha Baskoro)