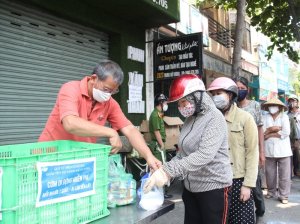 HANOI – The decree is set to cover six beneficiary groups of up to 20 million people who would receive financial aid in cash for the next three months.

The Vietnamese government has enacted a relief package worth VND62 trillion (US$2.7 billion) to provide financial support for some 20 million vulnerable people directly affected by the Covid-19 pandemic.

Under the plan, people out of work and self-employed people having not claimed jobless benefits, and household businesses forced to suspend operation from April 1 could receive VND1 million (US$42.63) a month, while social beneficiaries and revolutionary contributors are entitled to VND250,000 – 500,000 (US$10.73 – 21.32) per person a month.

Meanwhile, for workers having labor contracts temporarily suspend and taking unpaid leave for over 14 days are entitled to a subsidy of VND1.8 million (US$76.74) a month during three months.

Enterprises having to lay off their employees in three months could seek preferential loans with zero interest rate from the Vietnam Bank for Social Policies to pay salaries for workers.

The funding for the package would come from state and provincial budgets, including savings from regular expenditures for meetings, workshops, abroad working trips, festivals and others.

In addition to direct financial support, workers are entitled for deferral in contribution for pensions and death gratuity funds in 12 months.

Workers could submit application for financial support via postal services, email, and fax, among others without having to seek endorsement from local authorities.