Myanma Aswe, a symbol of national spirit of Myanmar 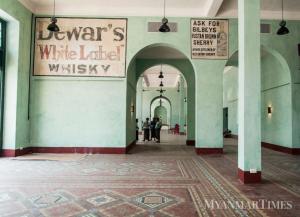 YANGON – Feeling nostalgic the film director U Thein Htut often stops by the place where his great-grandparents used to work.

Having a great love of and pride in the country, his great-grandparents, U Ba Nyunt and Daw Nan Shin, opened a department store named Burmese Favourite Co. (widely known as Myanma Aswe) on Sule Pagoda Road.

They ran the shop in colonial times, selling only local products in an effort to rival the Rowe & Co. department store on Merchant Road. Rowe & Co. also sold the latest fashion items and accessories, shoes, watches, glasses and books.

“These day people like to talk about the ‘national spirit’. In reality, the national spirit has been alive since our great-grandparents’ time,” said U Thein Htut, the film director and great-grandson of U Ba Nyunt.

U Thein Htut loved photographing the three-storey building from different angles whenever he went inside until 1988. He often felt sad to see the upper floors in a state of dilapidation and could not imagine the time when his great-grandparents worked in the building.

Last year, he felt euphoria again when he visited the building after it was renovated by Turquoise Mountain, an NGO focused on traditional crafts and urban restoration work in Myanmar. He especially likes the banner stretching across the front entrance of the building that reads “Myanma Aswe Company Myanmar Tike Saing Gyi, Burmese Favourite Co.”

The words had been invisible for generations, and now stand out proudly under the building’s roof.

“It seemed that the words were filled-over with plaster after the Second World War, and so they became invisible. The plaster was also redecorated with many layers. We peeled off the paint, and discovered the banner underneath. Then we had to repaint it to make it stand out again. The color we used today is the same colour of the original,” said Ko Ko, project engineer from the Turquoise Mountain organisation.

“I felt a deep sense of pride at what our great-grandparents and grandparents did for the country,” said U Thein Htut, whose mother lived in the building until the Second World War. His mother turns 100 years old this year.

Completed in 1905, the “Fytche Square Building” as it was originally known, was designed for an Indian Merchant by the British Architect Thomas Swales. In 1908 a wealthy businessman named U Ba Nyunt transformed the building into the city’s first Burmese-owned department store. He renamed the building ‘Myanmar Aswe, Burmese Favourite Company’, but the brand struggled to compete with the nearby Rowe and Co. store (now AYA Bank).

“They found it difficult to rival the Rowe & Co store, so they imported motorcars. Inside the building they created a showroom and sold imported cars such as Austins,” U Thein Htut said.

“They hosted grand promotional campaigns inside and at the nearby Mahabandoola Park. Everyone was entertained by the Anyeint, our traditional Myanmar dance performances,” he said. 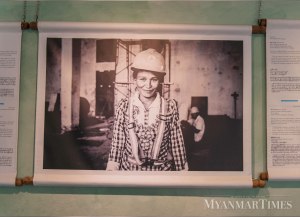 A picture of Shun Lae Aye, an architect who worked on the restoration project of the building. Shin Moe Myint (J)/The Myanmar Times

Turquoise Mountain also uncovered two alcohol brand advertisements on the wall of the ground floor –one for Dewar’s white label whisky, and the other for Gilbey’s sherry. These had been lost for decades, but were still in good condition.

In the 1920s U Ba Nyunt’s family created something of a literary and film hub within the building, with his son U Tin Nwe, setting up Dagon magazine, a starting point for many celebrated Myanmar literary figures, who often added Dagon to their pen names, such as Dagon Taryar, and Myanmar’s first female novelist Dagon Khin Khin Lay.

In 1923, the Myanmar Aswe company took over the Burma Film Company to create the A1 Studio, one of the first film studios to incite Yangon’s thriving film industry. Their offices were located in the building. Cartoonist U Ba Galay (Shwe Yoe) worked here producing films such as Longings in the Forest and Emerald Jungle.

The Second World War brought a halt to operations, with the building suffering severe bomb damage in 1942. The building was then used by the government as a distribution center for post war rations. 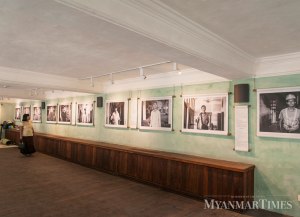 “When the A1 Studio became a successful film production company, they bought a 22-acre plot and constructed another studio in 8 Mile. During the war, the families dared not live in the building and moved to 8 Mile,” he said.

In the 1960s, the building was occupied by the Tourist Burma offices, which was responsible for arranging travel for the few tourists who were able to visit during that period.

Then in 1992, the newly established Ministry of Hotels and Tourism took over until 2005. When the ministry offices were relocated to Nay Pyi Taw, the building was abandoned and left empty. Renovation work started on the building in 2017, and were finally completed last year.

“We had received old photos of the building’s construction from the grandson of the architect who designed the building. We made every effort to renovate it to its original look,” said Ko Ko, project engineer from Turquoise Mountain.