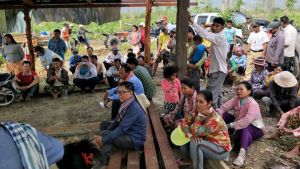 Hean said on Wednesday that he is preparing documents to be filed at the Kampong Speu Provincial Court to sue Sim, the first deputy commune chief, as the 120ha of bushland was given to 16 families affected by a project involving the Phnom Penh Sugar Company.

However, the land has still not been used to build any homes or grow any crops as there are still small forest trees on it. “I explained to the people not to protest as authorities would arrest them, not the person behind them,” he said.

Kin Phalla, 45, who represents the 16 families, said he was shocked when 100 people protested to get the land when it had already been allocated by the government in 2013.

He said the 120ha was allocated to them by the authorities as compensation, but that the land is still not in use.

“We have the acknowledgement from local and provincial authorities that we are the rightful landowners. We have not made use of the land yet as it is still populated with small forest trees and without a tractor, we cannot plough through the land ourselves,” he said.

Sre Kin village chief Im Sorn confirmed on Wednesday that the 120ha belonged to 16 families, and that commune and provincial authorities had given the land to them as they were the victims of actions carried out by the Phnom Penh Sugar Company.

He said he was also aware of the protests, but dismissed them as being held by immigrants from other provinces such as Prey Veng, Kampong Cham and Battambang who just work in the area.

“I do not know how I should solve the problem as I am just a low-level officer. I am waiting for the authorities. Even if I intervene, no one would agree with the decision at my level. Also, I do not know who is behind the protest,” he said.

Sim who was accused of being behind the protest could not be reached for comment on Wednesday.

Commune chief Tep Nem told The Post on Wednesday that he received news of the protest but could not go there as he was attending a meeting at the Oral district hall. But he too confirmed that the land belonged to the 16 families in question.

He further said he suspected that Sim was involved in the protest. “He had previously negotiated to buy and sell land in the area without bothering that it belonged to the 16 families, so could have been the person behind this protest.

“Let him solve this by himself. If someone files the complaint, I don’t have any problem as I do not support villains,” he said.

Neither Oral district governor Muong Thy nor the deputy director of provincial Department of Environment Nov Nak could be reached for comment on Wednesday.