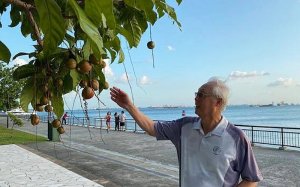 In a posting on Facebook, Goh said it was a privilege for a septuagenarian to be able to enjoy nature and the simple pleasures of life, “unlike nonagenarian Mahathir”.

Goh said: “We got our politics right and our planned political succession is proceeding smoothly.”

His remarks were made in a caption to a photograph showing him next to a tree in Marine Parade.

In a separate posting this evening, a relaxed former Malaysian prime minister Najib Razak, took a similar swipe at the political crisis in Putrajaya.

Posting a photograph showing him fishing, Najib said: ” It’s not over yet. You people can all follow. The Netflix saga has failed. I’ll try to get some peace first.”

Goh succeeded Lee Kuan Yew as Singapore’s second prime minister in 1990. He held office from November 1990 to August 2004, with Lee in his Cabinet as Minister Mentor.

In August 2004, Goh handed over power to Lee’s son, Lee Hsien Loong, and served in Lee’s Cabinet as Senior Minister until retiring in June 2011.

In 2018, when Mahathir returned to power as prime minister after retiring in 2003, Goh also took a swipe at Mahathir while saluting Mahathir’s“indomitable will and energy” and commitment to honour Singapore’s independence.

Goh disclosed that he had been working “for Singapore in various capacities” but said he had “no plans to do a Mahathir”, a reference to Mahathir’s return to power.

During their years as heads of government, Goh and Mahathir were often at loggerheads over such issues as control of air space, sale of Malaysian sand to Singapore, and the price that the island republic paid for raw Malaysian water.

Last year, they appeared to have reached a reconciliation, with Goh describing Mahathir as an amazing man.

Mahathir resigned earlier today as prime minister and as chairman of his party, PPBM, which he founded in 2016. However, he was appointed as interim prime minister by the Yang di-Pertuan Agong pending the formation of a new government.

Mahathir’s resignation came amid speculation about MPs from PPBM, Umno, PAS and others forming a new coalition to take power.