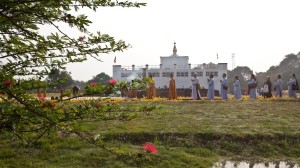 MANDALAY—To boost tourism with Myanmar, Nepal has announced that direct charter flights connecting Lumbini with Mandalay and Yangon will begin in May. The move is part of the “Visit Nepal 2020” campaign to boost tourism to the Himalayan country.

Lumbini, a major Buddhist pilgrimage site, is revered by Myanmar’s Buddhists as the birthplace in 563 BCE of Prince Siddhartha Gautama, who achieved enlightenment about 35 years later and became Buddha, the founder of Buddhism.

The Nepali ambassador to Myanmar said Gautama Buddha International Airport in Lumbini will open in May, in time for celebrations of the birthday of Buddha.

“A charter flight, flying from Mandalay and Yangon international airports, will be able to fly to the new Gautama Buddha International Airport in May, as soon as the airport is operating,” Nepali Ambassador Bhim K. Udas said at an event to promote tourism to Nepal, held in Mandalay on Saturday.

Gautama Buddha Airport has served domestic flights since 1958. The upgrade of the facility into an international airport began in 2015. It will be Nepal’s second airport accepting international flights.

The ambassador said the “Visit Nepal 2020” tourism year coincides with the 60th anniversary of diplomatic relations between Nepal and Myanmar.

“The new flight route will become a part of celebrations of the 60-year anniversary of our relationship with Myanmar, too. The direct flight route will save time for travelers and we hope there will be more Burmese and Nepali travelers [flying on] this route,” he added.

Myanmar Vice Minister for Hotels and Tourism U Tin Latt confirmed that initially only charter flights carrying groups of Myanmar Buddhist pilgrims will make the direct trips to Lumbini. Plans to introduce scheduled flights are still being discussed with the Ministry of Transport and Communications.

“Direct flights to Lumbini will save travelers time and boost tourism to both Myanmar and Nepal. We will begin with charter flights and, after agreements and arrangements are made with the Ministry of Transport and Communications, scheduled flights will follow, hopefully,” U Tin Latt said.

According to the Nepal Embassy, around 500,000 to 600,000 Myanmar Buddhist pilgrims visited Nepal—especially Lumbini, Kathmandu and Pokhara—via India in 2019.

According to figures from the Ministry of Hotels and Tourism, about 1,000 to 3,000 Nepali tourists visit Myanmar each year.

Currently, there are no direct flights from Myanmar to Nepal. Travelers must transit in Bangkok, Thailand, or in Gaya, New Delhi or Kolkata in India.