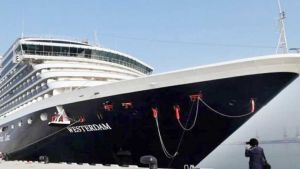 The MS Westerdam was allowed to dock at the port after it was denied docking rights by Japan, Taiwan, Guam, the Philippines and Thailand. Hun Sen’s Facebook page

In a message via Twitter on Wednesday, the director-general of the World Health Organisation Tedros Adhanom Ghebreyesu thanked the Royal Government of Cambodia and Hun Sen for clearing the way for the ship to dock.

“This is a welcome act of solidarity at a time when the world has a window of opportunity to stop Covid-19 and avoid stigma and fear,” he said.

The MS Westerdam belonging to Holland America Line was allowed to dock at the port after it was denied docking rights by Japan, Taiwan, Guam, the Philippines and Thailand.

Prime Minister Hun Sen, told Fresh News that permitting the ship to dock at Preah Sihanouk port was done on humanitarian grounds. He reiterated his earlier statement that “panic” was the real disease, not Covid-19, the official name given to the disease caused by the 2019 Novel Coronavirus.

Hun Sen said: “Permission to dock reflects the eradication of the panic disease happening around the world. Cambodia does not wish to discriminate but participate in a humanitarian act when they [passengers] are in the state of emergency.”

So far, Covid-19 has killed over 1,350 people, mostly in China, which has also imposed a lockdown of millions of its citizens in various cities, especially Wuhan, in Hubei province, the epicentre of the disease.

The MS Westerdam arrived at Preah Sihanouk on Thursday morning but will remain at the port for several days for disembarkation, said Holland America Line.

The ship was on a 14-day Taiwan-Japan cruise. It departed Hong Kong on February 1 with 1,455 guests and 802 crew on board. Of the number, 687 passengers were to continue sailing from February 1 and arrive in Yokohama, Japan, on February 15 for the next embarkation, Holland America Line said.

However, fear of contracting the fatal Covid-19 disease caused its docking rights to be withdrawn. The MS Westerdam than attempted to dock at ports in the other countries, but this too was rejected.

American passenger Christina Kerby said everyone remained upbeat with news that Cambodia had allowed the ship to dock.

She said all the passengers were still offshore, but Cambodian officials had gone on board to collect passports to issue visas for the passengers who have already been assigned flight tickets out of Phnom Penh.

Holland America Line said via Twitter: “Guests on board continue to be safe and well cared for. The ship is not in quarantine and we have no reason to believe there are any Covid-19 cases on board despite media reports.

“Guests will be able to go ashore. All approvals have been received and we are extremely grateful to the Cambodian authorities for their support.”

It said after disembarking, passengers would be transferred to Phnom Penh by charter flights and travel home afterwards. The company would pay for all flights home and fully refund payments for the cruise.

While the preparation for the passengers’ flights back to their home countries is underway, Cambodia has received various messages of appreciation for the humanitarian act of welcoming the unwanted ship.

US Ambassador to Cambodia Patrick Murphy said the US and Cambodian governments were working together to facilitate the docking of the MS Westerdam in Sihanoukville.

“We greatly appreciated that Cambodia offered assistance to the Westerdam. The safety of Americans abroad is my highest priority,” he said, adding that his embassy team was currently in Sihanoukville to assist the authorities with disembarking and the transfer to the next destination.

He said the Cambodian authorities were conducting screening that may take some time to complete, and this requires patience and cooperation. “From the US embassy in Phnom Penh, we are sticking with you as long as it takes.”

Meantime, US Embassy spokesperson Emily Zeeberg told The Post: “We are greatly appreciative of Cambodia’s efforts and assistance, and its hospitality during this difficult time.

“The ship is reporting that there are no confirmed cases of coronavirus on board, and the medical personnel on the ship are monitoring the situation closely.”

She added that the embassy team welcomed the arrival of the ship.

Provincial governor Chamroeun told the media on Thursday that the medical team was checking the passengers’ health on board the MS Westerdam, and that not all of them would disembark.

He said only passengers who already had flight tickets arranged by Holland America Line would leave the ship in order to continue their way back home. First, they would be transferred by buses to Sihanoukville international airport for their flight to the Phnom Penh International Airport.

Chamroeun said blood tests were done on 20 people due to reports that they had symptoms like typhoid and diarrhoea.

“According to the information we received from the captain, they have different diseases. What we know for sure is that four of them have a stomach ache and six had diarrhoea.

“Let’s be clear about this, we have to confirm if the 20 suffer from Covid-19. Our medical team is working on it and conducting the relevant tests.

“We cannot confirm their condition as of now. What we can say is that blood samples have been taken for tests,” Chamroeun said.

He said five to six flights could have been made with each flight accommodating up to 180 passengers.