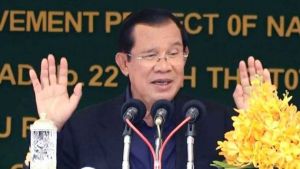 Hun Sen defended his decision not to cancel flights from China. Ministry of Information

PHNOM PENH, Cambodia – Prime Minister Hun Sen on Tuesday criticised countries that have cancelled flights with China following the outbreak of the Novel Coronavirus (2019-nCoV), arguing that such moves amounted to discrimination against the Chinese.

In a speech delivered during the groundbreaking ceremony for work on national roads 2 and 22, Hun Sen defended his decision to allow air traffic from China, saying that cancelling the flights would have amounted to economic suicide for the Kingdom.

“If Cambodians contracted a disease and weren’t allowed to enter shops in another country … how would we feel? Chinese people are also human. When the Chinese are not given visas to enter a country, allowed to board a flight or enter a restaurant, how do you think they feel? They feel insulted,” he said.

He said discrimination against the Chinese is now a global problem. “We have to come up with a solution. Even the World Health Organisation is asking people not to say that the disease comes from China.”

Meanwhile, the Ministry of Health on Tuesday said a Dutchman in Sihanoukville suspected of being infected by the coronavirus has tested negative.

The man arrived at the Cambodian coastal town on Monday by ship from Vietnam. When he tried to board the ship that same day to leave the city, screening equipment showed that he had a fever. The man was immediately sent to the Preah Sihanouk Health Department.

“Later, an emergency response team from the department took samples from the man to conduct tests at the Institut Pasteur du Cambodge. The tests yielded negative results,” the press release said.

The man has since been allowed to leave the hospital.