Civil Rights Violations On the Up in Indonesia 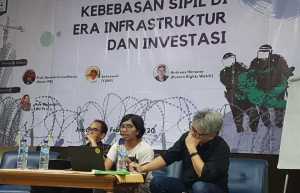 JAKARTA – A study performed by the Indonesian Legal Aid Foundation, or YLBHI, shows that democracy in Indonesia deteriorated last year, as more than 50 people died in demonstrations around the country and thousands faced prosecution for expressing their opinion in public.

“We didn’t expect there were so many civil rights violations,” YLBHI director Asfinawati said in Jakarta on Monday.

“There were more than 6,100 cases of people being prosecuted just for expressing their opinion in public, more than 300 of those involving underage children. At least 51 died while exercising their right to express their political opinion in public. Those are data from just 16 provinces [out of 34 in Indonesia] so the real number could be higher,” Asfinawati said.

The data in detail showed 6,128 people were prosecuted for expressing opinions in public, 324 of them underage. Of the 51 deaths, 44 died from unknown causes, six were shot and one succumbed to tear gas.

Papua and West Papua topped the list of provinces with the most number of civil rights violations with 18 cases, followed by Jakarta (11), Central Java (9) and South Sulawesi (7).

“Criminalization [of civilians] occured a lot, especially against individuals who spoke up about mining or forestry issues. Citizens have the right to criticize state development, but instead they’re being prosecuted,” Asfinawati said.

“Demonstrators were hunted down for voicing their rights. When they were caught, they got beaten or arrested. We think these violent acts were intentional to project fear, so people would stop protesting,” she said.

Asfinawati said the government has been ignoring these civil rights violations for too long and that democracy has now become just another political tool to attract votes.

“There is no guarantee that these [prosecutions] wouldn’t happen again. [President] Joko Widodo is very development-oriented, and the people around him [are the same]. But the Coordinating Minister for Political, Legal, and Security Affairs should pay close attention to the problem,” she said.

To prevent more civil rights violations, Asfinawati suggested everyone must play their part. Exposing such cases on social media has been proven to work, so people are encouraged to pull out their smartphones and record them when they happen.

“Even a simple action like that can contribute to preventing violations. If there’s a new means to do it, then do it,” Asfinawati said.

The YLBHI study confirmed the results of other studies in the last decade that suggested democracy in Indonesia is in continuous decline. For example, rights group Setara Institute found at least 2,400 cases of religious freedom violations in Indonesia in the past 12 years.

YLBHI and other civil groups have also released the “2020 Outlook on Freedom of Religion and Faith in Indonesia” report, which revealed that the number of religious freedom violations in Indonesia are increasing each year.

Meanwhile, in the Economist Intelligence Unit’s (EIU) Democracy Index 2019 ranking, Indonesia was up one spot globally to 64th on the list out of 167 countries with a democracy score of 6.48 out of ten. According to the index, political culture and civil liberty in the country have not improved since 2018.