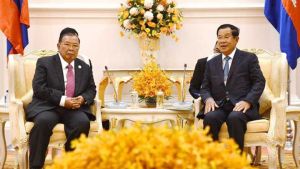 PHNOM PENH – Cambodia reaffirmed its strong ties with its neighbour to the north during Laotian President Bounnhang Vorachith’s visit to the Kingdom.

Bounnhang arrived in Cambodia on Sunday and departed the next day after meetings with National Assembly president Heng Samrin and Prime Minister Hun Sen in which both sides highlighted the strong ties between the governments.

According to the post, Bounnhang asked Cambodian leaders to help him strengthen relations between the countries. To protect peace and ensure economic development, he said it was particularly important to foster good relationships between Cambodians and Laotians living alongside the countries’ common border.

On his part, Samrin lauded the Laotian government for its economic achievements and for raising the living standards of its people. He said under the leadership of the Lao People’s Revolutionary Party, living standards will continue to increase.

“The friendship and comprehensive cooperation between our governments and our peoples can only bring more prosperity to our nations,” Samrin said.

According to a post on Hun Sen’s official Facebook page, during the meeting, Bounnhang expressed satisfaction with the fact that Cambodia and Laos had become “comprehensive strategic partners.”

“Prime Minister Hun Sen underscored the importance of forging closer ties between local authorities and the armies on both sides of the border. Anything can be overcome if the relationship is strong.

“Local authorities on both sides of the border can forge closer ties through different initiatives, such as joint sporting events. Anything that can strengthen the relationship between Cambodia and Laos must be pursued to ensure peace when problems arise,” the post said.

The Royal Academy of Cambodia’s International Relations Institute executive director Kin Phea said the border remains a sensitive issue in relations between Cambodia and Laos because the countries have not reached a complete agreement.

“However, this visit will help to improve the relationship between the countries. Cambodians and Laotians are brothers and sisters. We are good neighbours with a shared history, traditions and culture,” he said.

During his meetings with Cambodian leaders, Bounnhang focused on border issues to ensure peace if a new dispute arises, he said.

Cambodia and Laos have planted 86 per cent of the markers needed to demarcate their shared border. They have vowed to finalise this work soon.