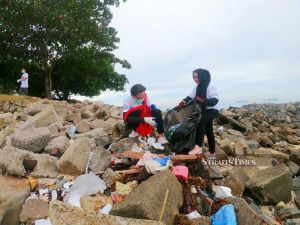 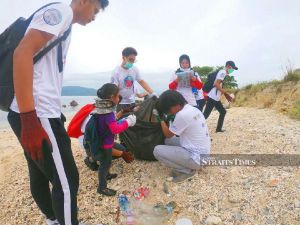 KOTA KINABALU, Malaysia : Volunteers have picked up a whopping 350.63 kilograms of rubbish along the beach of Sutera Habour Resort and the uninhabited Sulug island here, yesterday.

Plastic bottles made up most of the trash, with 2,281 bottles collected during the beach clean-up programme under the second phase of Sustaining Kota Kinabalu’s Marine Heritage project.

Noting that beach clean-up campaign had become an “in-trend” around the world, the project’s programme coordinator Dr Chen Cheng Ann said the activity was aimed at improving the condition of the beaches and coastline in the state capital.

He said civic awareness was imperative in combating plastic pollution and that beach clean-up volunteerism would help address the issue, although not solving the root cause of the problem.

“If you stop littering then there is no rubbish.

“So, let us create a better path for building a more sustainable, more hopeful future for the Earth and at the same time, protecting the planet for future generations.

“This small action makes a huge difference. We don’t want to live in a trash bin, so stop making one,” said Chen, who is also Head of Marine Science Programme under the Faculty of Science and Natural Resources, Universiti Malaysia Sabah (UMS).

The second phase of the project was participated by 131 students and lecturers from UMS, University College Sabah Foundation, National Taiwan Ocean University, Management and Science University College, as well as staff from Sabah Parks and Kota Kinabalu City Hall.

Meanwhile, Reef Check Malaysia who is the co-organiser of the programme, called on everyone to play their part in stopping trash from ending up in the ocean.

Sabah Parks Head of Division (Research and Education) Nasrulhakim Maidin lauded the continuous effort that had been initiated via this project.

“Sabah Parks is glad to be part of this effort and we are looking forward to be involved in other similar project especially in Pulau Sulug, because we don’t currently have any staff based on the island,” he said.