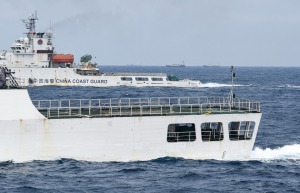 JAKARTA, Indonesia –  Even before the tense standoff between Indonesia and China broke out in the North Natuna Sea two weeks ago, many Indonesians had already grown averse to the ever-increasing influence that the world’s second-largest economy wields in the region.

They see China as the most influential country in Asia – but in an increasingly negative way – relegating the United States to second place, a study by the Indonesian Survey Institute (LSI) revealed on Sunday.

In July last year, the LSI randomly sampled 1,540 respondents across Indonesia to ask the question, “According to you, which country is the most influential in Asian?” Around two in five respondents, or 39 percent, answered China.

The survey claimed a margin of error of 2.5 percent and a 95 percent level of confidence, which means that, if the claim is to be believed, between 36.5 to 41.5 percent of Indonesians shared the same sentiment.

The US came in second place, being claimed by 18 percent of the respondents as the most influential country in Asia. Japan, Indonesia’s long-time trade and investment partner, came in third with 14 percent.

Only 1 percent of Indonesians said India was the top regional player – around the same amount as those who voted for Russia.

Nevertheless, 23 percent of the respondents said they did not know which country was the most influential in Asia, while 10 percent refused to answer. The remaining 2 percent mentioned a smattering of smaller countries.

“Usually in a study like this, the US would come out on top and Japan at number two. But from 2016 to 2019 there has been a shift in people’s perception. China has overtaken the US and Japan, and left Russia and India far behind,” LSI executive director Djayadi Hanan said in a press conference on Sunday.

But China’s growing influence has not been always seen in a positive light.

“The Chinese influence is being perceived quite negatively,” Djayadi said.

An LSI study in 2016 showed only 19 percent of respondents saw China in a bad light. But in 2019, 34 percent saw the country as dangerous – the same proportion as those who thought of China favorably, Djayadi said.

Djayadi said the different perceptions about China did not seem to be influenced by the respondents’ gender or where they live – in rural or urban areas.

Economic conditions and political affiliations, however, seemed to have influenced many people’s views about China.

“People who think the economic conditions in Indonesia are getting worse generally have a more negative view of China,” he said.

Respondents who voted for political parties that have joined the Jokowi coalition in the government also tend to have a positive view about China’s influence and also that of the US. Indonesians with a university degree and higher-than-average income, meanwhile, tend to have a negative view of China, Djayadi said.