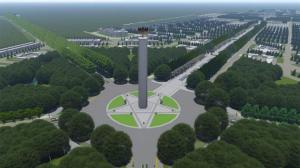 The design of the Field and Monument of Pancasila for the Ideas, Plans and Criteria Designs of the Capital City. Photo: The Public Works and Public Housing Ministry

“The basic design by the winner of the contest will become the basis because the Indonesian element is there,” he said after the meeting with the Coordinating Minister for Maritime and Investment Luhut Binsar Pandjaitan and winners of the design contest for the country’s new capital city in East Kalimantan.

The meeting has also discussed the possibility of involving foreign consultants to finalize the design.

Some countries have tasked their consultants to help Indonesia design the new capital city, Pandjaitan disclosed in the meeting.

“This would be bilateral cooperation,” he said, adding that the help would be provided in the form of grants.

Winners of the design contest will also share their advice in the final design.

The Public Works and Housing Ministry had announced the “Nagara Rimba Nusa” design as the winner of the contest for the new capital city in East Kalimantan.

The design beat 755 other contestants to win a prize of Rp2 billion.

The ministry also announced four other runners-up namely The Infinite City, A Thousand Furrows, The Emerald of the Equator and The Village of the People of the Archipelago.

Despite being the winner, the “Nagara Rimba Nusa” design would not be used as the sole basis for the new capital. The government would collaborate with the top three contestants as well as international designers.