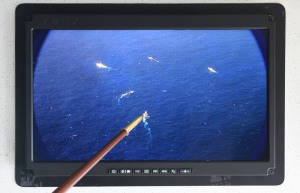 An officer shows the video footage of an encounter between an Indonesian warship and the Chinese Coast Guards in Indonesia’s North Natuna Sea on Saturday. The video was taken by the Air Force’s surveillance aircraft AI-7301 from the Sultan Hasanudin Makassar base. (Antara Photo/M Risyal Hidayat)

JAKARTA, Indonesia – The Indonesian government will never negotiate its sovereign rights over the Natuna waters off Riau Islands province with China, following alleged border trespass by Chinese fishing boats and Coast Guard in the area, the chief security minister said on Sunday.

The government has said earlier it has no overlapping jurisdictions with China and that it never recognizes the so-called nine-dash line — a territorial claim by Beijing that encompasses 90 percent of disputed areas in the South China Sea and goes deep into Indonesia’s Exclusive Economic Zone in northern maritime borders.

Coordinating Minister for Political, Legal and Security Affairs Mahfud MD reiterated that Indonesia’s EEZ in the North Natuna Sea has been determined by the United Nations Convention for the Law of the Sea (UNCLOS) and therefore there is no need for bilateral negotiations to assert Indonesia’s sovereignty over the area.

The Indonesian Military has beefed up security and surveillance in the North Natuna Sea in response to the incident.

“In regard to the incident involving Chinese fishing boats who were guarded by the Chinese government ships, in principle Indonesia will never negotiate with China,” Mahfud was quoted by Antara news agency as saying.

Mahfud, who was visiting Brawijaya University in the East Java town of Malang, said any negotiation over the North Natuna Sea would imply that Indonesia recognized a territorial dispute.

He said Indonesia has the legitimate jurisdiction and sovereign rights over the North Natuna Sea within the legal frameworks of the UNCLOS.

“China has no rights to claim the area. If we negotiated with them, it would imply that we recognize a territorial dispute [with China]. There is no dispute as Indonesia is the legitimate owner of the whole area,” Mahfud said.

He also said the government would never set up a negotiating team for the North Natuna Sea.

“The negotiating team is out of question. We will defend our sovereignty and expel [intruders] with all that we’ve got,” he said.

An Indonesian warship docks at the Ranai Naval base in Riau Islands province before its deployment to the North Natuna Sea on Friday. (Antara Photo/M Risyal Hidayat)