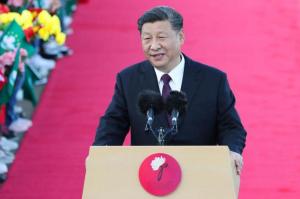 The Myanmar government is preparing to host a visit of Chinese President Xi Jinping to the country to discuss China-Myanmar relations and the progress of Chinese development projects, according to government and media sources.

It will be over a decade since Xi Jinping’s first visit to Myanmar in 2009 and a great deal has changed since then.
The visit is said to be set for January 17.

Progress has been made with major projects that represent important development programmes for China. Bilateral discussions have focused on China’s Belt and Road Initiative (BRI), and the China-Myanmar Economic Corridor (CMEC), including the Kyaukphyu Special Economic Zone (SEZ), viewed as Beijing’s strategic window to the India Ocean. But there are indications that Beijing will be pushing to speed up the projects.

In addition, there are other Chinese investment projects that are likely to come up for discussion, including the controversial Myitsone Dam project that was put on hold by the previous Myanmar government under President Thein Sein.

Analysts claim Myanmar has moved closer to China in the wake of the Rakhine crisis, as a number of Western countries including the United States have raised concerns about human rights in the conflict-ridden state.