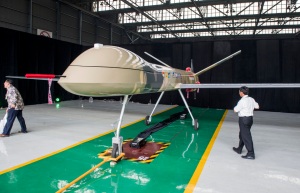 The drone will help the government ward off territorial threats from the archipelago and keep an eye on potential threats including smuggling, terrorism and natural resource thefts, the company claimed.

“Its first flight is targeted to be carried out next year. As of now, we are still undergoing the manufacturing development process,” Dirgantara president director Elfien Goentoro said at the company’s Rotary Wing Hangar in Bandung, West Java.

The MALE UAV requires a 700-meter runway for takeoff and landing. It is capable of cruising to up to 20,000 feet at the highest speed of 235 kilometers per hour. It can also stay in the air for up to 30 hours.

In its development, the aircraft will be armed with missiles as well, he said.

Dirgantara, which also produces small propeller aircraft, is developing  two prototypes for flight and structural tests at the Agency for the Assessment and Application of Technology, or BPPT, with an aim to get a certification by 2024.

The military version of the drone will require a separate certification from the Ministry of Defense, expected by the end of 2021.

The MALE UAV also aims to tackle the country’s perennial issue of forest fires through forest and land supervision.

“Forest fires occur every year and they require a continuous supervision on cloud, climate, hotspots and the water level of peatlands,” BPPT head Hammam Riza said.

Its synthetic aperture radar, or SAR, can detect water content of up to 30 cm under the surface level. The detected lands in need of moisture can then be watered to prevent forest fires and hotspots, Hammam said.