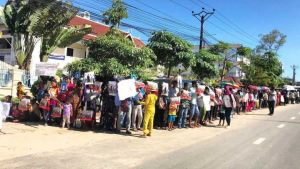 Villagers protest on May 21 to request the local authority to intervene in their land dispute. Coalition of Cambodian Farmer Community

The Preah Sihanouk provincial administration last Saturday denied the request of land communities for a public location in the province to celebrate International Human Rights Day 2019 as the administration had already held forums to discuss land issues.

However, the land community representatives said they would still hold the forum.

The objection letter from the Preah Sihanouk provincial administration informed citizens who have been involved in land disputes that it does not allow the organisation of the public forum.

This was because previously, the provincial administration had held dissemination and consultation forums of town, district and commune councils.

It said public forums in communes and dialogues with civil societies were organised in the province twice a year and concerned land disputes and other issues at the request of the public.

On December 3, representatives from 11 land communities in Preah Sihanouk province submitted a letter and invited the provincial governor to celebrate the 71st International Human Rights Day on Monday.

The letter said 250 people who had been involved in land disputes and hold permanent addresses in Stung Hav and Prey Nop districts as well as Sihanoukville, will participate in the forum.

The request letter from the community representatives said: “The [public] forum would provide an opportunity for people who have land disputes to raise their concern to the relevant authorities.

“It would also increase cooperation with local authorities, civil society and people who have a land dispute in Preah Sihanouk province to promote human rights, social justice and democracy in Cambodia.”

You Veasna, one of the four land community representatives who requested to organise the forum, told The Post on Sunday that although the provincial administration rejected the request to celebrate the event, it will still be held.

He said it was just a public forum to raise concerns about land disputes of villagers to the local authorities.

Veasna said: “Our will is that we continue [with the plan] to celebrate the event. I have received the letter objecting to the event on Saturday and the provincial administration even published it on Facebook on Sunday.”

Preah Sihanouk Provincial Hall spokesman Kheang Phearum said on Sunday that the provincial administration turned down the request for a public forum and the invitation to the provincial governor to attend it.

He said: “If the community representatives continue to organise the public forum, we must check the Law on Peaceful Demonstrations whether the public rally has a permit or not?

“So if [they] have no permission but still hold the forum, [they] will face action according to the law.”