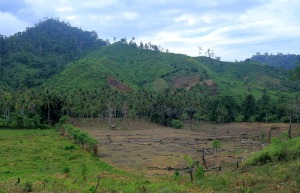 Indonesia needs to replant 800,000 hectares of forest every year to reverse the impacts of climate change. (Antara Photo/Frans)

JAKARTA, Indonesia –  The government has launched a program to replant and protect natural forests in Indonesia, luring local people to join it with the promise that they would be allowed to harvest some of the forests’ yield.

The Environment and Forestry Ministry has already spent Rp 2.7 trillion ($200 million) since January to replant 206,000 hectares of forest by the end of this year – ten times the area the ministry had managed to replant before 2019.

Behind the increased target is a novel forest rehabilitation approach that the ministry had only just started to implement: recruiting local people to run nurseries and then plant tree seeds from the nurseries in the target areas.

This system also provides steady employment for the locals, discouraging them from destroying their forests.

Some of the seeds were seeds of fruit trees like the macadamia, jackfruit or clove, that the people can harvest and sell.

“Aside from rehabilitating the environment, we’re also creating jobs. A one-hectare nursery needs 30 to 40 people to run,” Environment and Forestry Minister Siti Nurbaya said at the weekend.

The minister visited one such nursery in Tegal, Central Java, on Saturday.

“If our forests are in good condition, then our environment will be, too. Water would be plenty, and communities will thrive,” Siti said.

The minister said the forest replantation program is critical to stem the impacts of climate change in Indonesia.

“According to studies, Indonesia needs to replant 800,000 hectares of forest per year to maintain a stable and cool climate,” Siti said.

Siti said the government would to continue to roll out the program, first in tourist areas like Lake Toba, Mandalika, Borobudur and Labuan Bajo, then in areas near dams and reservoirs, and also in the new Indonesian capital in East Kalimantan.