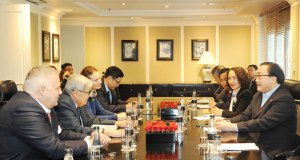 At the meeting. Photo: Viet Thanh

The French delegation is on a working visit to Vietnam from November 18 to 21.

Speaking at the meeting, Secretary of the municipal Party Committee Hoang Trung Hai thanked the French Communist Party for the warm welcome given to the Hanoi delegation led by himself during a working visit to France in September 2019.

Hai appreciated the practical cooperation contents that the two sides exchanged and discussed in Paris. This is a proof of the special relationship between the two parties, he said.

For his part, Jean Charles Nègre said that the recent meeting in Paris has contributed to strengthening the friendship between the Communist Party of Vietnam and the French Communist Party.

Jean Charles Nègre proposed to coordinate with relevant Vietnamese departments and agencies to organize an international tennis tournament in Vietnam in the coming time and wished for long-lasting cooperation between the French and the Vietnamese Tennis Federations.

The two sides also exchanged some contents on the basis of the outcomes from the survey made by the Hanoi delegation with a number of French corporations and businesses with a view to rolling out essential infrastructure projects.