The Travel lists Hanoi among ten places to visit in Vietnam 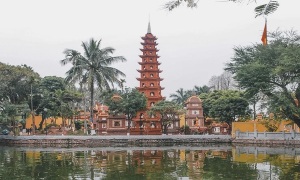 The iconic Tran Quoc Pagoda in Hanoi. Photo: The Travel

HANOI, Vietnam –  Hanoi, a blend of old and modern values, East and West, promises to offer nice surprises to visitors.

Among several destinations with great foods, interesting historical sites and so much fun to do in Vietnam, the travel guide magazine The Travel has narrowed down the list to ten places in the country that should be visited as soon as possible, and Hanoi is in the lead.

“Hanoi is the capital of Vietnam and is definitely among the first places people think about when they’re planning a trip to Vietnam,” The Travel wrote.

The magazine also noted some most amazing things when it comes to exploring the land of the rising dragon, which implies Hanoi, including visiting the notable Old Quarter or taking a stroll to one of the many cafes and restaurants across the city. “Whether you’re taking a bike tour or a cooking class, there are so many ways to experience Vietnam in Hanoi”, it stressed.

Vietnam News Agency once reported that Hanoi was again listed in various tourism rankings this year. Japan’s All Nippon Airways ranked the city 25th among the 26 best Asian cities for a combination of business and leisure.

Most recently, it was named in the US’ Cable News Network (CNN)’s list of the 17 best places in Asia.