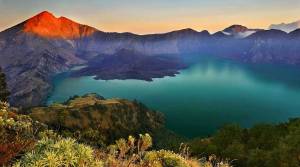 Married couples will still be allowed to stay in the same tent. Photo: Rinjani National Park

“It’s still being discussed; we have yet to implement the rule,” TNGR head Sudiyono told The Jakarta Post in Mataram on Wednesday.

He added that the agency was currently introducing the policy to the public and related stakeholders. He assured that there would be enough space to have separate areas for male and female visitors.

“We just need to divide [the camping ground] by making a strict boundary; the right side for men’s tents, the left one for women,” he said, adding that the rule would only apply to unmarried hikers.

Married couples will still be allowed to stay in the same tent, he said.

The policy will be introduced to the public in the coming months.

Sudiyono said the idea had come from the people living around Rinjani who believed that last year’s earthquakes were caused by the disrespectful activities of hikers.

“This is our suggestion to the government, and we also hope to offer a more convenient experience for hikers,” he said. (gis/kes)