“We have run more than five surveys to assure the safety before the hiking trail is opened,” said Sudiyono on Thursday, June 13.

In addition to security and convenience factor, the economy of people in the mountain areas who earned a living by providing service for hikers was also taken as the consideration. 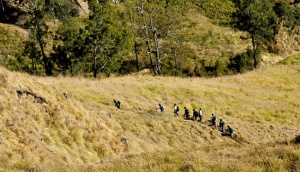 “Since the last year’s earthquake, the people cannot work and get income because the closure of hiking trails,” said Sudiyono. In fact, locals living in the mountain area were also quake victims who lost their homes and faced other difficulties.

Despite the reopening, Sudiyono reminded the hiking was only allowed until Pelawangan. “They are barred from reaching the mountain peak and Segara Anak Lake,”

The total number of hikers will also be limited to 500 people per day through four official trails namely Sembalun in East Lombok, Senaru in North Lombok, Aik Berik in Central Lombok, and Timbanuh in North Lombok. The quota included porters and tour guides.

Sudiyono said that his staffers would register each tourist. “So there will be no illegal hikers. All will be documented and use tickets,” he added. People can purchase a ticket to hike Mount Rinjanithrough the e-Rinjani application that available on Playstore.