The once deserted Cambodia beach turning into a popular tourist attraction 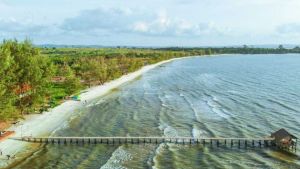 Ta Barang (translated as French grandpa) is a private beach that has become popular after thousands of Facebook users shared photos of it. Hong Menea

With its long white sand beach and wooden bridge leading to a straw hut above the water, Ta Barang (Ptranslated as French grandpa) is a private beach that has experienced almost overnight success after thousands of Facebook users shared photos of it.

Stepping down from a dark green Jeep, 68-year-old Puth Chantaravuth sports a white beard, dirty T-shirt and pants. He is walking around collecting litter in the beach’s parking lot.

“I used to live in France from the age of 22, so when I came back here people called me bong barang [French brother], pu barang [French uncle], oum barang [French older uncle] and now ta barang,” the owner of the resort says.

Ta Barang is located in Keo Phos commune’s Rithy II village in 1ha of land that Chantaravuth bought more than two decades ago.

The Cambodian-Frenchman, who formerly worked for Royal Air Cambodge before it closed in 2001, tells The Post: “In 1997 I bought this land to build my own house to live with my wife because I love the sea air. I’ve developed it step-by-step and it suddenly became a hit on Facebook recently. Before, there were a few visitors who came here, but it was not famous.”

Chantaravuth says that during Khmer New Year the beach welcomed far more visitors than it ever has done before.

“In the Khmer New Year holiday, there were so many people who came in. I can’t estimate the exact number but at least 500 people. It was a lot,” he says.

Chantaravuth explains that his resort recently found fame after a chance encounter with a motorbike group.

“What has brought fame to this beach is a motorbike group who were visiting from Prei Nub. They came here, interviewed me and posted it on Facebook. They said the water is good, the beach colour is white and their kids can play around,” he says.

Chantaravuth has built six huts along the beach for guests to stay in, as well as a long wooden pier leading to a hut sitting on stilts in the ocean that is also available to rent.

But with the number of visitors now outstripping the facilities available, Chantaravuth says this success may have come too late as he now feels too old to expand the resort. 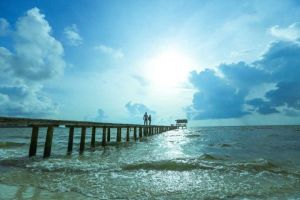 Chantaravuth, the Cambodian-French owner of the resort, has built six huts along the beach for guests to stay in, as well as a long wooden pier leading to a hut sitting on stilts in the ocean. Hong Menea

“I can’t do it. Some people ask me to build more relaxing spaces, but I don’t want to. I am old, this is enough for me. I developed in the past because I love my customers and it’s my honour that I can host them today. But now I am so exhausted; I do not want to expand and build ten or 20 story buildings,” he says.

“If you had come when I bought this land, you would see it was just forest land that had no road and very few people. Locals only came to go fishing.”

Chantaravuth says the food at his resort largely caters to local tastes.

However, the Cambodian-Frenchman says that with the dramatically increasing number of visitors at Ta Barang, he takes his responsibility to protect the local environment seriously, asking visitors to be considerate of this.

“I suggest people help keep the environment clean, but some of them do not follow my request. Some people leave litter on the ground, so I collect it and burn it. I won’t allow the garbage to disturb the beach because I love it so much.”

The pensioner says that now he has returned to his homeland and bought this land, he isn’t going anywhere.

“I will never leave this home. I love it so much. I do not want to leave the country for France again.” 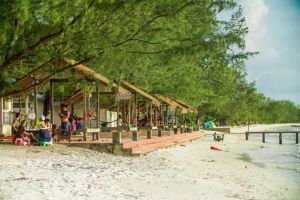 Ta Barang has six huts for rent at 30,000 riel per night and two bungalows at $60 per night each. The resort is located in Steung Hav district’s Rithy II village, Preah Sihanouk province.