Jakarta Fashion Week 2019 opens in splash of colors and collaborations 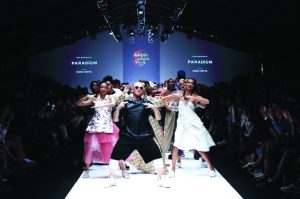 Dancers and models walk the runway of the opening show of Jakarta Fashion Week 2019 in Senayan City, Jakarta. (Photo courtesy of Image.net)

“This week, we’ll go on a collective journey filled with colors, trends and new directions for Indonesian and world fashion,” she said.

“We’ll explore not only our historical roots, from songket to ikat, but also the fashion histories and styles from many other countries, including England, Japan, South Korea, Australia, Pakistan, India and France. All for the betterment of fashion,” she said.

Starting this year, JFW is also part of ID Creative Week, a string of creative industry events taking place in Jakarta in the same week.

JFW 2019 will showcase 2019 fashion collections by 204 designers from Indonesia and abroad.

The opening night also featured a dance show by Paradigm Fitness Indonesia, and a runway parade of models and designers who will appear in the next week.

The opening day was dominated by a show called “The Unstoppable You,” sponsored by rising local make-up brand Wardah Cosmetics.

The theme was inspired by the lifestyle of women living in the world’s big cities.

Seven of Indonesia’s best up-and-coming fashion designers were selected by Wardah to create special collections based on this theme.

“I took part in New York Fashion Week last year,” Dian said. “And I was awed by the bold but practical fashion choices of New York’s women, which definitely suit their busy lifestyle.”

Belts, inscribed with the designer’s name, complimented the outfits.

Norma Hauri, inspired by Jakarta’s busy women, presented a collection of abayas in vibrant colors, which she paired with pants, jackets and overcoats.

“I think these dresses would suit Jakarta’s women who are always on the go from morning till night,” Norma said.

Barli’s dresses, which were made of delicate materials such as chiffon, lace and knit, featured a relaxed fit that allowed a lot of room for movement while still looking classy and chic.

“The collection is inspired by the idea of life beyond big bustling cities, where the pace is slower and lifestyle simpler,” Michelle Tjokrosaputro, creative director of the brand, said.

Makoto, the Japanese stylist, then layered these items on the models to create a series of relaxed country looks for the runway.

The label’s Spring/Summer 2019 collection, called “Versed,” is made up of vibrantly colored women’s dresses and men’s daily wear adorned with graphic patchworks and embroideries designed by Indonesian visual artist Muklay.

“It’s a very colorful collection, and Makoto put them together [for the runway] very cleverly,” Liza Mashita, co-founder of the label, said.

Makoto added a playful touch to the collection by making all the models wear cute paper hats on the runway.

More than 70 make-up artists and 50 hair stylists, helmed by senior make-up artist Qiqi Franky, will style the models at JFW 2019.

Aside from runway shows, JFW 2019 will also feature talkshows and workshops featuring the world’s fashion experts.

On Tuesday, the Japan Fashion Week Organization will present the “Event Management in Global Runway” talkshow, where audience can learn what it takes to organize global fashion events such as the Amazon Fashion Week Tokyo, and meet the experts working behind the scene.

On the same day, British designer Rob Jones, Indonesian designers Sean Loh and Sheila Agatha Wijaya and the British Council will also host a talkshow with the theme “Celebrating Diversity, Human Stories and Inclusivity in Fashion.”

The designers will discuss their efforts to include disabled men and women in their fashion projects.

And as it does every year, JFW will end on Friday with the Dewi Fashion Knights, a show featuring rising stars in Indonesia’s fashion scene.