Malaysia minister: I ordered removal of portraits from GTF exhibit, no promotion of LGBT 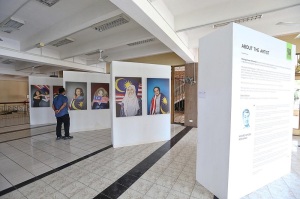 PENANG 08/08/18: An exhibition held in conjunction of the Georgetown Festival shown a photo of known Lesbian, Gay, Bisexual and Transgender (LGBT) Activist photo, Datin Marina Mahathir and Lawyer Siti Kasim that been put up here at Dewan Sri Pinang. PICTURE BY SAYUTI ZAINUDIN

A visitor at the ‘Stripes and Strokes’ exhibition in George Town August 8, 2018. — Picture by Sayuti Zainudin

KUALA LUMPUR, Malaysia — Minister in charge of Islamic affairs Datuk Mujahid Yusof Rawa confirmed today that he had ordered the organiser of George Town Festival (GTF) to take down the portraits of Nisha Ayub and Pang Khee Teik from an exhibition.

He said the two activists were clearly promoting Lesbian, Gay, Bisexual and Transgender (LGBT) activities, which he had previously said was not in line with the Pakatan Harapan (PH) government’s policy.

“I was informed that there is an exhibition that showcases pictures labelled LGBT activists and they were portrayed with the rainbow pride logo. It’s done in a public gallery.

“I contacted the state government to check if the claim is true. It is not in line with what I consistently repeat in Parliament as the policy of this new government.

“I guess that answers your question as to why the pictures were taken down,” the minister in the Prime Minister’s Department told reporters at the Parliament here.

Mujahid was responding to statements made by transgender rights advocate Nisha, whose portrait was one of two removed from the Stripes and Strokes exhibition at the month-long GTF in Penang.

The two portraits were among 28 portraits of various Malaysians holding the Jalur Gemilang.

Mujahid, however, explained among the reasons he made the decision was to protect the activists from being victims of witch-hunts.

“We received a lot of comments from those who are hostile towards this group, so in order to calm the situation down I had to make the call.

“My main concern I don’t want them to get hurt or victimised. Many are enraged by their ‘openness’. I want to protect them,” he said.

Mujahid had previously said that he cannot stop the LGBT group from living their ‘lifestyle’ in private, but he would never agree to it being practised in the open as it is not in accordance with Malaysia’s religious and cultural norms.