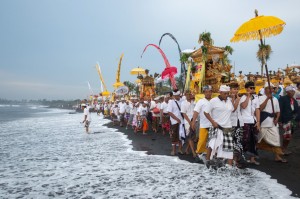 A procession of Balinese Hindus walk along a beach during Melasti, a purification ceremony ahead of the holy day of Nyepi, in Gianyar, Bali, Indonesia March 25, 2017. REUTERS/Agung Parameswara

TripAdvisor’s head of destination marketing for Asia Pacific Sarah Mathews handed the award to Bali governor’s economic and development assistant Dewa Putu Sunartha in a ceremony at the Seminyak Beach Resort and Spa in Bali on Thursday (20/04).

The Ministry of Tourism’s resources development deputy Gede Pitana, who attended the ceremony, said,”This award should attract even more tourists to Bali and Indonesia. We expect 20 million foreign tourists in 2019.”

Mathews said the award was based on ratings and reviews written by travelers on the TripAdvisor website. Bali was on top of a list of 419 outstanding tourist destinations across the globe.

“Bali offers the best experiences in food, culture and ecotourism. We want to share them to the rest of the world,” Mathews said.

Bali beat London in second place and Paris in third to top the list.