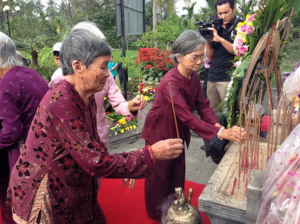 QUANG NGAI, Vietnam – Many people, including US veterans, gathered in the central province of Quang Ngai on Wednesday to commemorate 504 people who were killed in the notorious My Lai Massacre 48 years ago.

In some of the most touching moments, US veteran Mike Boehm played a song on the violin while Billy Kelly, another veteran, placed 504 roses at the foot of the local memorial monument.

Like the relatives of the victims and many foreign tourists, the US veterans also offered incenses to the victims.

On March 16, 1968, 504 people from My Lai and My Khe Hamlets of Son My Village in Quang Ngai were killed by the US Army in a flurry of wanton bloodlust. Most of the victims were women and children.

Nguyen Dang Vu, director of Quang Ngai’s Department of Culture, Sports and Tourism, said at the ceremony: “Commemorating the My Lai Massacre is an opportunity to remind us that we are in peace.”