Truong Thi Thom is at work on the third day of the Lunar New Year (February 10) with the help of her 5-year-old daughter, Trang. Photo: Ho Hai Hoang 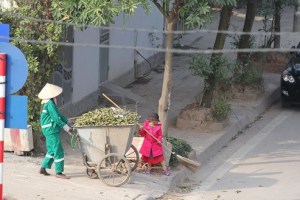 Her daughter helps cleaning the street as Thom is busy with the cart. Photo: Ho Hai Hoang

Almost all Vietnamese kids are dressed in their best clothes for the Tet Lunar New Year holiday, but this year only one of them became the unlikely social media star.

HANOI, Vietnam – Over the past week, many Vietnamese have been sharing a photo of a 5-year-old girl, in her pink coat and red dress, pushing a cart full of fallen leaves alongside her mother, a street cleaner.

Ho Hai Hoang, the photographer, said he captured the “emotional moment” on a Hanoi street on the afternoon of February 10, the third day of the New Lunar Year.

Hoang said the happiness of the mother and her daughter inspired him to take a series of pictures. The little girl kept smiling as she helped her mother sweep the street with a broom much taller than her.

“I was blinking back my tears. I felt really warm and peaceful,” Hoang told Thanh Nien.

Truong Thi Thom, the 28-year-old mother, said the girl is her youngest child, named Trang. She also has an 8-year-old son.

Thom said she and her husband have separated and they have been leaving their two children with his parents in Thai Nguyen Province to work in Hanoi.

She did not have a long Tet break so she brought Trang over to stay with her for the holiday, which is considered a time for family reunion in Vietnam, so she does not feel homesick. That explains the girl’s happy smiles.

Thom said that for safety reason, she had to bring her daughter along any time she had to work.

“I was very surprised when the media shared our photos. Thanks everyone for showing your love to me and my daughter,” she told local media. 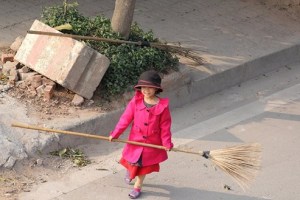 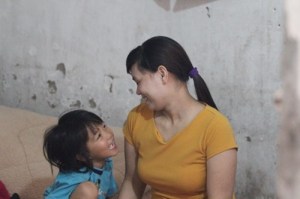 Thom and her daughter at her room in Hanoi. Photo: P.Ha/An Ninh Thu Do