The Regent Street Motor Show, Nov 1, saw 300 cars that span 125 years of motoring up close and personal on one of London’s busiest shopping streets. The famous West End street was closed from Piccadilly Circus to Oxford Circus for the UK’s largest free-to-view motor show featuring an impressive display of cars from the past, present and future. 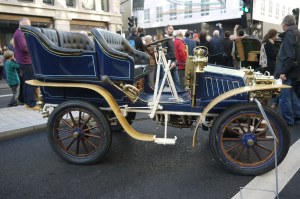 The free show, which was staged on the eve of the Veteran Car Run, offered a unique and interesting display of motoring from the 19th century to the present day. The street was split into zones with around 100 period vehicles, 20th and 21st century displays and a future concept display from some of today’s leading manufacturers.

The event on Saturday 1 November also previewed the Bonhams London to Brighton Veteran Car Run and included the EFG Concours d’Elegance featuring many of the extraordinary pre-1905 vehicles that will be driving from Hyde Park to the Sussex seaside resort on Sunday Nov 2.
regentstreetmotorshow.com