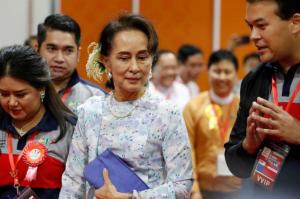 NAY PYI TAW, Myanmar – A military spokesman said that Myanmar government and military will jointly handle the case against the country at the UN International Court of Justice (ICJ) by using a team led by State Counsellor Aung San Suu Kyi.

“The State Counsellor, in her capacity as Union Minister of Foreign Affairs, will lead a team to The Hague, Netherlands, to defend the national interests of Myanmar at the ICJ,” the Myanmar government said in a press release.

Gambia, on behalf of 57-member Organization of the Islamic Cooperation, prosecuted Myanmar at the ICJ and the court will start its hearing in December.

Gambia accused Myanmar of violating the Genocide Treaty in regard to incidents that occurred in 2017 in Rakhine State, Myanmar.

Military spokesman Brig. Gen. Zaw Min Tun told AFP, “We are cooperating in this case and we are working together with the prominent international lawyers to defend this case.”